The Cheerleader by Caroline B. Cooney 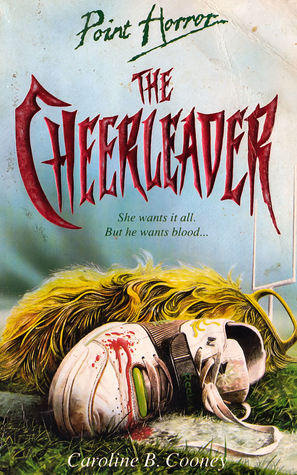 THE CHEERLEADER was later renamed DEADLY OFFER after this, and the two sequels, were rebranded as The Vampire's Promise trilogy. I used to own the third book, FATAL BARGAIN, and actually wrote fanfiction about it. Even though Cooney mentions multiple times that the vampire in this book is definitely not hot, fifteen-year-old me begged to differ, and wrote an alternative timeline where one of the girls gave in to his bite and went away to be his vampire bride forever. So, for those of you who read my books and asked yourselves, "Was she always so fucked up?" The answer, clearly, is yes.

I'm rereading a lot of my old childhood favorites in a challenge that my Goodreads friend Mark has helpfully dubbed Nenia's KU Nostalg-o-Rama™. Some of the books in the NKNoR™ challenge definitely don't hold up at all, but so far all of Caroline B. Cooney's books do. She just has such an interesting, quirky way of writing. It's melodramatic, poetic, and... interesting. Something about it always appealed wildly to melodramatic, poetic teen me.

THE CHEERLEADER is about a girl named Althea who feeds her classmates to vampires in order to become popular. She's a sad and lonely girl with a bit of an entitlement complex, and doesn't understand why she can't be a cheerleader, too. So she gives the vampire one of the cheerleaders so she can take her place. The vampire doesn't kill the girls-- he just makes them "tired" and kind of soulless. They basically slump around, lacking the will to do anything except exist.

It takes about two girls for Althea to realize that maybe popularity isn't worth being what is basically a murderer, because even though she's not killing these girls, she's definitely hurting them. The vampire is really the dark jewel in this crown, though. His lines are great and he's so seductively evil. You definitely understand how he lures his prey in... and why people find him hard to resist.

Reading this book as an adult was interesting because when I was a young and unpopular teen, I was like, "Yeah, fuck those cheerleaders! They deserve it!" And I didn't really like the ending or understand why she gave it all up when the consequences hardly seemed bad. But now, reading this as an adult, I'm like, "Really, teen me? Do they deserve it?" Also, I somehow missed how awful Althea was when I was a teen. Maybe because I was awful too, so I saw in her an ally who resonated with my own negative self-image and feelings of frustrated entitlement. I got two very different readings out of this book, reading it as a depressed teen and a happy adult. Both versions of me still secretly thought that she should have chosen the option of being his vampire bride, though.

Two qualms with this book, though:

1. WHERE THE HELL ARE ALTHEA'S PARENTS? She lives in this massive house... by herself? We never once see or even hear about her parents. Not once. It's weird.

2. The lack of closure at the end. What happens to the vampire's victims? Do they just stay empty shells forever? I wanted answers, dammit!

I was originally going to give this four stars but I'm really annoyed by the ending.

Mr. Vampire's still got it, though. #VampireBride