Glow: Vs the Star Primas by Tini Howard 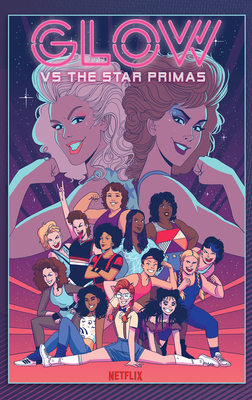 I was attracted to this graphic novel because of the big 80s hair and the Jem and the Holograms vibes. I didn't even read the summary before accepting the ARC, which turned out to be a good thing, because if I had, I wouldn't have requested this-- and I actually really ended up loving it a lot!

GLOW is based on a Netflix series of the same name about a bunch of women wrestlers who wear pretty costumes, undergo rigorous training sessions (#montage??), and craft elaborate backstories for their fights. It reminds me a lot of the Southpark episode that was about the same thing only much more good-natured, wholesome, and fun. The women in this book come from a variety of backgrounds, with a variety of body types, and some of them seem to be coded as being LGBT+ although I can't say for sure!

What I can say is that this is a fantastic book about female friendships. When the girls get sent to a competition that has double-booked with another female wrestling team, it seems like things are going to be tough. Especially since the other team is much more serious and skeptical about the somewhat lighthearted vibes of GLOW. But in the end, everyone ends up having a good time in the competition and learning a lot! It's so good!

Anyone who enjoys books with team dynamics, feel good comics, and stories about female friendship will love this. There isn't even much romance-- the focus is almost entirely on the sport and the platonic relationship between the women as they compete. This is the second graphic-novel I have received this month that is not only female-fronted but also showcases female friendships, and I can't tell you how happy that makes me. I stopped reading graphic-novels for a while because it felt like they were getting increasingly cheesecakey and violent, so stuff like this is a godsend.