Beneath the Haunting Sea by Joanna Ruth Meyer 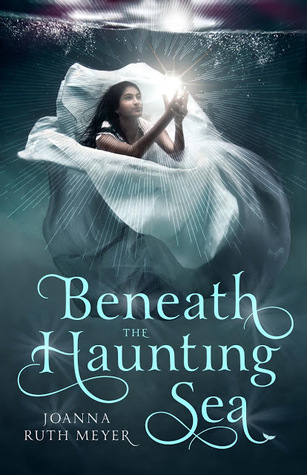 One of my blogger friends dumped an ARC of this on me a while ago and I never read it because I am a bad person. Recently, I was offered a review copy of BEYOND THE SHADOWED EARTH, only I didn't realize it was the sequel to this because the covers didn't match. Because I am an honest person, I figured I should probably read the prequel before diving into the sequel, so I (belatedly) read this "ARC" of BtHS at last.

I hated this book. It falls into a category that I refer to as Basic Bitch YA™ (or Basic Girl YA™ if I'm posting said review to Amazon, because they aren't too keen on the "swears" over there, and I wish to respect their wishes lol). Whether it's BBY™ or BGY™, the premise is the same: extremely generic fantasy novels geared towards the youths, featuring overwrought writing bogged down with its own sense of self-importance and poetic lassitude, combined with insipid female heroines that are nothing to shake a stick at, but that doesn't stop them from attracting all the "sticks" anyway, because this is Becky of the Golden Vagina™, after all.

Talia, our personal guide to this world of BBY™, is the daughter of the Emperor. But there's this Meanie Meanerton™ named Eda who is also the daughter of the Emperor and happens to be a lot better at getting shit done than Becky-- I mean, Talia. While Talia is whining and sulking, Eda stages a coup to not only get the Emperor to change his will (and possibly murder him, who knows); she also gets Talia and her mother kicked off to a faraway country where she'll be forced to marry the son of the Baron, thus tying her to the lands and getting her permanently out of Eda's crosshairs.

Wow, what a woman! I'd rather read a book about Eda!

But sadly, we're stuck with Talia. Her mother dies on the journey (suicide), which makes Talia extra sad. I might be sympathetic if she doesn't immediately indulge in a love square. Even though she's engaged to Wen, she falls for his brother Caiden, and cheats on him while continuing to act like she and Wen are BFF(SNS), or Best Friends Forever (Sorry Not Sorry)™. But oh no! It turns out Caiden has a fiancee as well, another Meanie Meanerton™ named Blaive. Blaive doesn't take too kindly to this cheating, which Talia finds really annoying! Doesn't Blaive know that she possesses a Golden Vagina of the Gods™? She lectures him on how much he has wronged her (no, really) and flounces away, only to get her heart "broken" again when Blaive forces him to set things right and propose. But no worries! Talia decides that she actually loved Wen this whole time! HAHAHAHA.

Also, Talia evolves from Charmander to Holographic Special Specialton Charzard First Edition™ when it turns out she's descended from the gods or something. Is Talia Celaena's younger sister? They're both soooooo special and everyone's obsessed with them. It's like a Lady Sovereign song. I kind of hated this book and I'm sad that I'm probably not going to like the sequel but oh well.