The Fog by Caroline B. Cooney 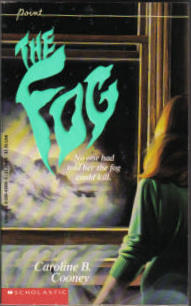 I'm reading (and rereading) a bunch of old YA books from the 80s and 90s. Some of them are new to me, but others are old favorites. FOG, SNOW, and FIRE were beloved Point Horror staples for me in my middle school years, although the books were later rebranded into what is now known as the Losing Christina series. I've joked that it should be called the Gaslighting Christina series, as this trilogy is an incredibly dark look at the psychological torture and emotional abuse of children.

Christina comes from an island off the coast of Maine called Burning Fog Isle. It's super small so once kids grow up, they have to go to school on the mainland. Thirteen-year-old Christina is excited about making friends, and boarding at a luxurious seaside inn with the other older island children: Anya, Michael, and Benj.

Pretty soon, though, Christina finds out that her new home and school have some pretty serious problems. The guest roomCs in the inn are pretty and quaint, but the children live in an unfurnished room at the top of a rickety and steep staircase where it's drafty and cold. Mr. Shevvington and Mrs. Shevvington, their caretakers, are also the principal and the English teacher of the school, respectively. They give new students surveys, asking them about their fears, and English assignments describing what they think it might feel like to die or have their parents abandon them.

Christina doesn't understand why none of the other adults or children seem to see through the Shevvingtons when what they're doing to her seems clear as glass. Anya, whom she shares a room with, becomes fascinated by the sea, and the Shevvingtons do nothing to curb that fascination. Indeed, they encourage it, and seem delighted by the fact that Anya might destroy herself on the waves. Because it seems like maybe they've done this before. To other girls. In other towns.

And if Christina isn't careful, she might be next.

Caroline B. Cooney is an amazing author. Not all of these books hold up over time, but everything I've read of Cooney's so far has. I think it's because she has a beautiful, unique writing style. It's like one of those sensational 1970s Gothic romances reimagined for a child, without being condescending in the least. I love the melodrama and the passion; there is restraint in the writing, but many of her books have this subdued sensuality that borders on erotic at times. And the atmosphere! The Maine coast is practically a character here, described with such lavish, chilling detail that you can almost smell the briny, cold sea air.

As a child I found it so chilling that there could be adults who might get enjoyment from torturing children. As an adult myself, I know better now-- but I think this book does a good job showing how some adults abuse their power to fuck with kids. And honestly, this is part of the reason this series is so near and dear to my heart. Christina is isolated by her peers and picked on by teachers, people who should be in her corner but instead encourage the bullying. I had that happen to me in high school. I was bullied pretty badly-- by students and by some teachers-- when I was just a year older than Christina. I spent most of my freshman year hiding in the library or the bathroom at lunch to avoid being picked on. So this trilogy really stayed with and resonated with me, because it helped me feel like maybe I could be strong like Christina was, and that I wasn't alone in my misery.

I admire Christina as a character just as much now as I did then, if not more so. Her bravery and resilience makes you root for her over the course of the trilogy. She goes through hell, only to climb out of it, grim-faced and maybe a little worse for wear, but flying her "tri-colored hair" like a war banner. I actually named one of my characters in my books-- Christina Parker from the IMA series-- after this character, Christina Romney. This book made me think of Christina as a strong and resilient name that was synonymous for survival, and when I wanted to write a book of my own about surviving against all odds, Christina was the first name that came to mind... because of THE FOG.

Anyway, as you can probably tell, this series is very important to me and I'm absolutely delighted to be able to say in all honesty that it does hold up. You can read it for free if you have Kindle Unlimited. I plan on reading the other two books soon and seeing how they weigh against this one.