Entangled Life: How Fungi Make Our Worlds, Change Our Minds & Shape Our Futures by Merlin Sheldrake 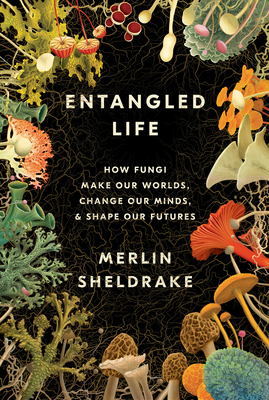 Okay, before I even get into this review, how perfect is this guy's name? Not only does he study mushrooms, he has a name like a professor in one of the Harry Potter books. Which is perfect, since mushrooms do have a bit of a reputation for being mysterious, sinister, and even kind of spooky. Which, if you read this book, you'll find out is a reputation that they totally deserve.

ENTANGLED LIFE is all about fungi (because they're fun, guys!), written by an author for whom this is clearly a passion project. It's like a non-stupid version of Goop Lab, only completely mushroom-oriented... or like Bill Nye for a higher grade level. In his quest to study the wild shroom, Sheldrake does all kinds of things like tromping through the rainforest to count flowers for a mushroom network, experiencing a "fermentation bath" (rotting wood and mushrooms-- ahh, relaxing!), or tripping out on LSD in a controlled lab environment... for SCIENCE!

I learned so much from this book that I didn't even know, like how cordyceps mushrooms (zombie fungi) take over carpenter ants, march them to their place of death mafia-style, only to consume the ant and sprout a mushroom out of its head when they're finished like they're some sort of hideous nightmare Pikmin creature! Or that mushrooms are actually more closely related to animals than plants. Mushrooms even have sort of a "hive mind" dynamic, because if you measure the electrical output of mushrooms while exposing one of them to a flame or chemical stimulus, several other mushrooms in the network will give a jolt of electricity. The author also quotes a scientist who refers to lichen as "a sensational romance...[an] unnatural union between a captive Algal damsel and a tyrant Fungal master."

OH MY GOSH you guys. I knew there was a reason I thought lichen was cool! It's basically the scientific equivalent of a medieval bodice ripper. SIGN ME UP.

Also, I learned about a really cool plant called "ghost pipes," which would be an excellent name for a Goth rock band. Ghost pipes are basically albino vampire plants that look like mushrooms and don't need to photosynthesize because of the presence of... FUNGUS. (Yaaaass!)

The book ends with some of the more practical applications of mushrooms, like how mycelium can be used to make furniture, biodegradable packing materials, and even clothes. Or how the presence of fungus can change the taste of bread, spices, and other foods for the better. And then there's a chapter about yeast and how it is used to create ciders and beers. Whether it's tasty, scary, or poisonous, this book isn't afraid to delve into it, as long as it's mushroom related.

I know we're all quarantined right now but if any of you are ever in San Francisco, there's a stall in the Ferry Building that's entirely mushroom-related and they have all these really exotic edible mushrooms that are hard to find, as well as colorful posters depicting mushroom taxonomies. I thought of that stall several times while reading this book.

ENTANGLED LIFE is definitely a must-read to learn more about the fungus among us.