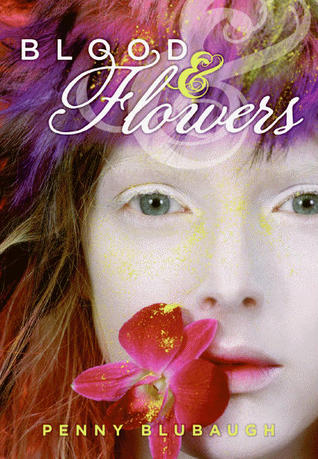 I'm trying to clean out my Kindle and last night, I spent about two hours deleting everything from authors whose books have bad ratings from friends on Goodreads, or who wrote one book I read and really didn't like to the point where I no longer wanted to give them a second chance. After the first initial purge, I'm now working my way through my short list of books I was actually really excited about reading & am finally getting around to.

I LOVE books about faeries and I love reading books with low ratings on GR (provided that they weren't from friends). My tastes are somewhat unconventional and I always wonder if maybe the reason a book missed the mark was because it didn't really resonate with the public because it would only appeal to a niche audience. BLOOD & FLOWERS with its dark, artsy premise seemed like it could be such a book. I mean, look at that cover. It's gorgeous! I can't stop admiring it.

Human Persia is a teen runaway who frolics around with a modern day theater group (picture art students from UC Berkeley). Some of them are humans, some of them are fae. In this universe, humans are aware of the fae and don't like them. Whenever something goes wrong, it's blamed on the fae. They're demonized and villainized, and considering how Floss, the fae in their group, talks about Faerie, maybe it's even a little warranted. The fae in this book seem like they're more than a little cruel.

The problem is... after more than a quarter of the way through a book, it DOESN'T GET MOVING. I was so bored. There is a definite disconnect between the characters and the narrative. It feels empty, soulless. I never really understood what made Persia tick or why I should care about her as a character. Also, the threat of faerie was never fully introduced-- not early enough. I tried to skim until they actually got to Faerie but the book is just way too long for me to even want to wait around and see if it eventually gets to the point. It's a shame, because it has a gorgeous cover. Oh well.