The Return Of The Vampire by Caroline B. Cooney 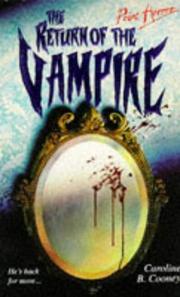 I'm rereading some of the old YA pulps that are available on Kindle Unlimited and among those are some of Caroline B. Cooney's contributions to Scholastic's Point Horror imprint. I grew up reading these books and they influenced many of my own writings. My favorites were the Losing Christina trilogy and the Vampire's Promise trilogy, although the names of those trilogies came later. THE RETURN OF THE VAMPIRE was actually renamed EVIL RETURNS when it was repackaged into the trilogy, something that confused me as a kid when I went to the library and found both editions, seemingly different books, until you opened up the covers.

Cooney has a pretty unconventional take on vampires. This one lives in a spooky tower and grants wishes that come with strings attached, kind of like Jareth from Labyrinth. Also like Jareth from Labyrinth, he has a somewhat inappropriate relationship with the teenage girls who enter into bargains with him. It's not quite sexual but there's a tension there that made me feel uncomfortable as a kid without quite being able to identify why. This is the stuff that writes a thousand fanfics.

The first book in this series, THE CHEERLEADER, is about a lonely girl named Althea who desperately wants to be popular, so she feeds some girls to a vampire in order to become a well-liked cheerleader. A flawed character to be sure, but relatable and interesting. My only qualms with the series were a lack of closure and the fact that Althea seemingly doesn't have any parents and lives in her house alone?? It's very disjointed and doesn't have the polish of some of her other books I've read.

THE RETURN OF THE VAMPIRE features another girl with a weird name. Devnee. Devnee is also a new girl who's desperate and alone, but she's a bit more unlikable and greedier than Althea. She doesn't just want to be popular, she wants to be beautiful... smart... everything. And the vampire is only too happy to give her what she wants, as long as she gives him what he wants.

This is the first CBC book I'm giving less than three stars. It feels very dialed in. It's a shame, because the first one was so good and really provides a lot of set-up for more Faustian bargains. Oh, well.