A Student of History by Nina Revoyr 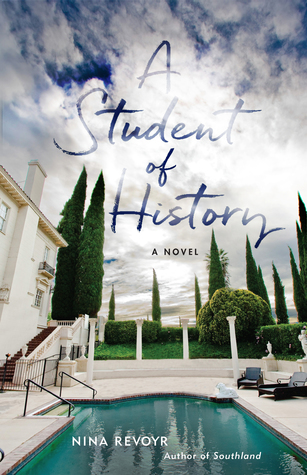 I requested a copy of this because of the comparison to GREAT EXPECTATIONS. That's my favorite Dickens novel, and I loved the idea of a modern re-imagining, replete with Gatsby undertones of lofty social climbing and unattainable socialite women. I did get that, but I also got a really interesting mystery reminiscent of THE THIRTEENTH TALE, in which an academic becomes privy to a powerful family's dirty secrets through the vein of research.

Richard is a graduate student struggling to make ends meet. He's on the cusp of losing his fellowship and is living paycheck to paycheck in the worst part of Los Angeles. When one of his friends offers to hook him up with an eccentric rich lady paying bank to type up her memoirs, he accepts without a thought. It isn't until he's driving up to her gigantic mansion that he realizes just how rich his employer is; Mrs. W, as we know her, is the grand-daughter of one of the original founders of Los Angeles, and beyond the trappings of her old world glitz and glam, and her anonymous charity donations, dirty secrets lie buried deep.

His advisor and a mysterious woman named Fiona are both very interested in Mrs. W's secrets, even though she's made it clear that she wishes the contents of her journals and her correspondence remain private. But Richard is heady on the fumes of wealth, even if it's not his own, and the power that moving in these circles provides. As he digs deeper and deeper into Mrs. W's history, and ends up learning things with the power to cause ruin, scruples fade, and ambition rises.

So obviously, I really liked this book. And it's funny, because usually literary academia books fall over themselves to proclaim that they're for readers who enjoyed THE SECRET HISTORY. I did not see such a comparison in any of the blurbs I looked at, but this was the first book I read that came close to achieving Donna Tartt's signature verbose style. Richard is neither good or bad, but he can be venal and self-centered, and a whole host of other things; and that doomed portrait of a character being drawn into ruin by apathetic rich people was so reminiscent of Tartt's books. I loved it.

If you like books about academia or Donna Tartt, I think you'd enjoy A STUDENT OF HISTORY. I was checking out some of the author's other books and they all look really interesting and have great reviews, so I think this is an author I may have to revisit, since I liked reading this book so much.