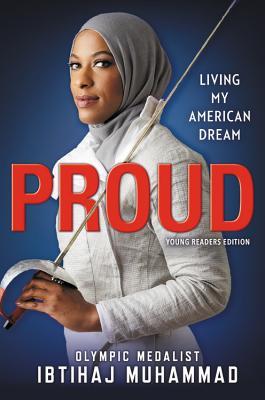 Some books inspire you to be a better person and pursue your dreams. PROUD by Ibtihaj Muhammad is one of these books. Looking on Goodreads, it seems like there might be two versions of this memoir and this one with the blue cover is the "young readers" edition. I haven't read the "adult" version with the white cover (if it is, in fact, the adult edition and not just a reprint), but I must say that if I didn't know this was for young readers, I wouldn't have guessed except maybe for the amount of white space in the text. This is such a well-written memoir, detailing Ibtihaj's early life as well as how she got into fencing (surprisingly late in life), as well as what it's like growing up in America and then becoming famous as a black Muslim.

I was surprised by how late she started fencing. She started in high school, if I recall correctly. Normally when you hear about these Olympian athletes, they've been coached since birth. So I felt like it was extra inspiring to hear that she started later; it makes you feel like you don't have to be a prodigy to accomplish great things. The descriptions of fencing were great, and I loved how she talked about the struggles, the physical exhaustion, and how much she had to sacrifice. She didn't shirk from describing her failures and disappointments, and you could tell from the writing how much her successes-- and her losses-- mean to her. It's captured so well in the text. Amazing.

The racism and sexism she encountered are also written about here a bit. One of her coaches didn't seem to like women and said and did a lot of things that seemed really aggressive and hostile. Her fellow Championship team were also very cold to her, to the point where it almost felt like bullying, and I was really surprised that they were allowed to be such bad sports and so cold and exclusive. That isn't what being on a team is supposed to be about and I was sorry she had to deal with that. She also writes about dealing with and being targeted by airport security, receiving death threats for her faith, being bullied at school, and working at an inner-city high school as a substitute teacher for a stint and being a painful witness to the inequality that exists in schools in low-income areas.

Ibtihaj also writes about her faith and how it inspires her every day, and why her mother converted to Islam in the first place. The United States is shockingly Islamophobic, and reading this made me want to put this book into their hands so they could see another side to the religion they baselessly fear. I am not religious at all, but I found Ibtihaj's faith inspiring, and loved the consolation and the peace that it seems to give her in some of her most trying moments. I also loved her mother's guidance and her close relationship with her siblings, and how loving and supportive her household was. Those full color photographs in the center of Ibtihaj and her family were everything.

PROUD is a great book. I've been reading it over the last couple days in between some of my more hardcore reads, and it put me in a good mood starting out my day with something so hopeful. I think this is a great book for anyone who would like to learn more about a great athlete who is notable for being the first American to compete in the Olympics wearing a hijab, as well as being the first American Muslim woman to win an Olympic medal. Her experience as a champion athlete, as well as being a woman of color in a sport that is predominantly white and affluent and privileged, is so important and I think this would be a great book to have in a classroom or school library.