An Unconditional Freedom by Alyssa Cole 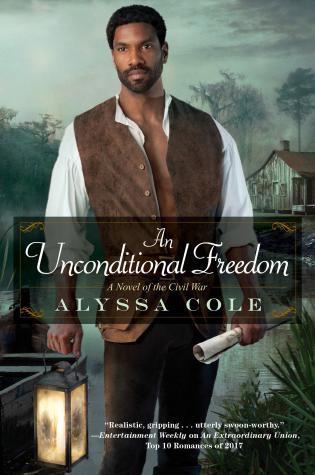 I was ambivalent about Alyssa Cole's earliest novellas, but I liked the concept of them. Shorter stories did not really seem to be her forte, and in my review of one of her earliest works, I wrote that she was an author I'd want to revisit if she ever did a full length novel. Well, she did, and that was a while ago, and I've been coming back over and over again, ever since. Alyssa Cole is walking proof that it pays to be an author who is receptive to feedback and works tirelessly to write fresh and engaging stories with developed and diverse characters-- especially strong women.

The Loyal League series is about a secret group of people during the time of the Civil War who go undercover to infiltrate and stymie the Confederacy. The first book in this series, AN EXTRAORDINARY UNION, which is about a woman who poses as a slave and ends up finding romance and wild success as a spy, was good, but this book, AN UNCONDITIONAL FREEDOM, is even better. Part of that is due to the heroine, Janeta, who is one of my favorite recent romance heroines.

Janeta is Cuban, and the daughter of a plantation owner and a freed slave. All her life, she has been told that she is better than those working in the fields. She has a white lover who is a Confederate supporter, and when her father is imprisoned, this lover encourages her to gather intelligence on the North so she can name names and give information in exchange for her father's freedom.

Daniel is a friend of Elle from the first book. He is a free man and had studied to be a lawyer, only to be caught and sold into slavery by two evil men posing as abolitionists. Now he is free again and hungry for revenge. When the Loyal League assigns Janeta to him as his partner, he's skeptical of her and her motivations, and unwilling to trust her. But despite his suspicions, he ends up falling for her because of her strong will and their shared pain brought on by slavery and the war; both of them have been caught between their own desires and what society wants for them their whole lives, and in working to save a Nation and its people, they end up finding the agency to also save themselves.

I. Loved. This. Book. First, I love that Janeta was allowed to be so flawed, and that she had to figure out her own privileges and biases. I love that she did that without help. Daniel didn't have to "teach" her; she was canny enough to figure out that she'd been fed a pack of harmful lies her whole life. The double-agent angle provided so much tension, and it was so well done. Plus, there were no big misunderstandings. Everything had a sound reason and I never felt like Cole was playing things up for drama. The action scenes were intense, and there were some fantastic discussions about humanity, inequality, and privilege that fit the scenes and didn't come across as heavy-handed.

Here are some of my favorite quotes:

"We can be intelligent, we can accrue wealth, we can strive to make this country better, and lose everything at the whim of some pale sir or madam. It doesn't even require much effort on their part. That's the worst of it. They don't even have to try hard to ruin us" (61).

"I care because as long as slavery is sanctioned in this world, either directly or tacitly, we are a doomed species. There is no hope for progress, no hope for a world of peace and prosperity, if some men are allowed dominion over others for as arbitrary a reason as skin color" (190).

Then there's Daniel-- the textbook example of a tortured hero. I loved him so very much. He was kind and noble, but also selfish in his own ways; he had taken his suffering and made his pain into a selfish drive for revenge, even at the cost of his personal relationships and self-love. The love-hate relationship between him and Janeta in the beginning was catnip for my fangirl self. I'm a sucker for the tsundere model of shipping (read: cranky character pretends not to care, but secretly does-- a lot), and he and Janeta were such an easy couple to root for, and an HEA that was easy to smile about.

If you enjoy historical fiction and want to read one that's empowering for and stars people of color in roles of agency, replete with excellent character development, The Loyal League is the way to go.