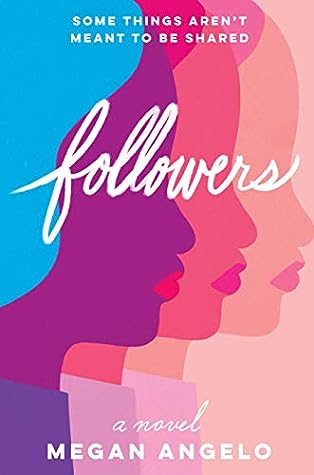 I have other ARCs that I should have been reading before this one (deadlines, yo), but after reading a few pages of this book to "sample," I ended up not being able to put it down. I picked up FOLLOWERS because it sounded a little like Dave Eggers' THE CIRCLE, only without the terrible sex scenes and unrealistic protagonist that made THE CIRCLE seem like a social media version of RED SPARROW (i.e. exploitative and bad).

FOLLOWERS is coming out in January 2020, which is really the perfect time, since it's the time of new years, new resolutions, and FOLLOWERS is all about people who will do anything to tap into that idealized version of ourselves we all wish we could be and then becoming famous. There are two different narrators, set in two different timelines. In the present day, there's Orla, a wannabe writer who lives with a wannabe starlet. One day the two of them hatch a scheme that ends up catapulting them both to fame with disastrous results. The second plotline takes place in the future and is about a woman named Marlow who's famous for being famous, but having an existential crisis because of it.

Both Orla and Marlow are great heroines because they're heavily flawed and make a lot of bad choices, and the book explores the effects of those choices and the possibility of redemption. The dystopian aspect of it explores the superficiality and vapidness of listicles and famous-for-being-famous celebrities of the Now, and a Truman Show-esque-like post-social-media future, where technology and psychology have merged to the point that everyone can tune in via brainwave and everything and anyone can be filmed and viewed for one's voyeuristic pleasure.

I think the messages of FOLLOWERS and THE CIRCLE are both very similar, in that they both take a "social media is bad" approach. Social media is not inherently bad in my opinion, but it does act as a magnifying glass-- acts of good become hyper-focused, but so do acts of bad, and sometimes with disastrous consequences. The cataclysmic event in this book that ends up causing the rift between our Now and Marlow's Future capitalizes on this nature of "bad," by showing that a lot of us are a bit too cavalier with what we choose to share online, and that the internet really isn't as durable or secure as we'd like it to be; it's far from being compartmentalized, and we should be careful in how we use it.

The reason I'm not giving it a five is because I didn't really like the ending-- it felt too easy. I also feel like, for a dystopian, this book really didn't do the best job painting the future as horrific and doom-laden, which I look for in books of this nature. I was kind of hoping for a social media version of Brave New World or 1984, and while I sort of got that, I also sort of got a book that felt more like chick-lit, in that the focus was on mid-life crises, family, and finding yourself. And that's totally fine and it was done pretty well here, but I don't think it's what people reading this are signing up for.

Overall, though, this was a pleasure to read, and I think it will be a hot item for book clubs and might even become a movie (although hopefully, a better movie than THE CIRCLE ended up being). If you enjoy thoughtful, speculative fiction and would like a gentler dystopian novel with mid-2000s chick-lit vibes and flawed heroines and some pretty on-point jabs on social media and click-bait, this will be a great book for you. It even gets in some laughs at Donald Trump's expense, which I support.