Reclaiming Our Space: How Black Feminists Are Changing the World from the Tweets to the Streets by Feminista Jones 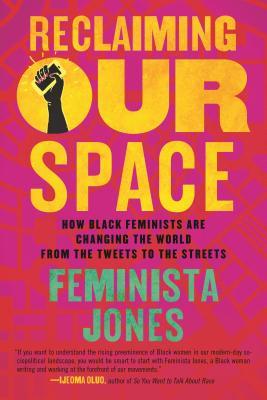 This is a difficult book to review because I really wanted to like it, but so many things about it rubbed me the wrong way that I wasn't able to appreciate it like I wanted to and ended up not really getting that much enjoyment or value out of it.

RECLAIMING OUR SPACE is a book written by Feminista Jones, a black activist on Twitter who has had a hand in a lot of popular social media activism movements. The subtitle "How Black Feminists Are Changing the World" made me think that I was going to get an in-depth look on, well, other black feminists, especially ones who inspired Ms. Jones and her current views, but with a few exceptions, that wasn't the case. This is basically a manifesto, and while there's nothing wrong with a manifesto, I think advertising this book as one thing when it's actually another thing is a bit deceptive and setting up this book for a fall.

This book has several topics, the most notable are, a brief overview of Black Feminism (and how it is similar to and differs from "white feminism" or "traditional feminism," with nods to intersectionality), some of the movements that black feminists championed or pioneered, harmful black stereotypes and white feminism (accidentally or purposefully) being exclusionary to women of color, and sexual empowerment and how that fits in to feminism, specifically black feminism.

There were some things that I really liked about this book. I thought the history of the movements themselves were really interesting, and I was interested in seeing her views on how mainstream feminism can improve and be more inclusive to women of color and the LGBT+. On the other hand, I raised my eyebrow at the idea of "womanism," since that term itself feels kind of exclusionary to the LGBT+ and specifically black members of the LGBT+ who might not identify as women (thinking in particular of trans and intersex). She also said some other things that made me raise my eyebrow, and couldn't help but make me question some of her own personal attitudes about allyship and feminism.

I learned a lot from this book and I think it's always important to check your privilege and make sure that your own experiences aren't blinding you to the experiences of others, who may be facing far more immediate and pressing difficulties. I also think it's important to read a lot of different views about the platforms you believe in, and try to understand where the people who have those views might be coming from. I also get that this book is probably not written for me, or people like me, and so my views are biased. That said, I just didn't really enjoy this book or the way it was organized, and while there were elements I appreciated, my overall experience reading this was one of disappointment.

Hopefully your experience reading this is better than mine.