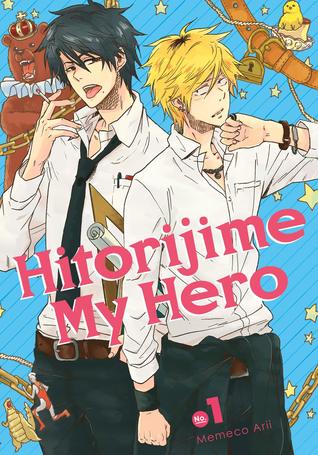 I don't read as much manga as I did when I was younger, but I still occasionally read the odd volume-- especially the ones aimed at older audiences, like josei and seinen (basically, the "new adult" versions of shoujo and shounen). HITORIJIME MY HERO was an especially nice surprise, because for once, I feel like the cover did a pretty good job not just representing what the art is like, but also conveying the tone of the manga.

Setagawa (the blonde) is a jaded and sullen teenager who works as a gofer for a petty gang. I feel like it's implied that his mother is a prostitute. He doesn't do particularly well in school, and his closest friend (an outgoing, immature young man) is the younger brother of the hot new teacher, who also happens to be a champion street fighter called "the bear killer" (lol).

One day, Setagawa ends up working for Kousuke instead, and even though his feelings are initially rejected, it turns out that Kousuke had feelings for him all along. Their relationship is taboo, but both of them feel alone and need each other.

I guess how you feel about this book depends on how you feel about student/teacher romances. I don't feel particularly great about them, but the fact that this is a cartoon makes it an extra level removed from reality, which I guess makes it more comfortable to swallow as fantasy. Setagawa is drawn as being much older than he actually is, so I originally thought they were around the same age or that Setagawa was a recent graduate. Kousuke also looks young, too.

As a romance, I feel like this was pretty well done. It's got a silly, manic vibe (captured on the cover), but also some darker, more provoking moments. The sexual tension was pretty well done, and although this is nothing near as explicit as the June Yaoi titles, there are some romantic and sexual scenes in here (although not explicitly drawn). There doesn't appear to be much tension, so I'm curious to see how this will make it as a series. In my opinion, a good manga needs a villain.

Two other things to note: this is apparently a spin off of another manga title called Hitorijime My Boyfriend. It doesn't appear that reading that other series is necessary to enjoy this one, as these leads were actually side characters from the original series. Second, I loved the translation/cultural reference section at the back that defined not just certain words and brands, but also gave cultural context for some of the scenes and references happening. I really, really appreciated that.