Poinciana by Phyllis A. Whitney 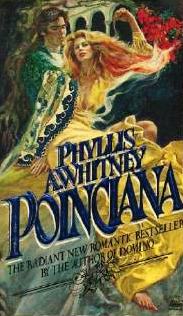 Victoria Holt might be the most famous Gothic romance novelist but in terms of consistently good output, I think Phyllis A. Whitney is by far the best. POINCIANA, with its twists and turns of family drama, inheritance, Japanese art, and revenge, reminded me why I love these books so much. If you ever read those Point Horror middle grade novels as a kid, the effect of these is much the same, only with more sex and scandal, and with adult characters instead of kid ones.

Sharon is the newly orphaned daughter of a famous stage actress and her admiring husband. After her parents died in a terrible accident, she ended up marrying one of her parents' friends, a man named Ross many years her senior. He takes care of her and appreciates art as much as she did, particularly Japanese netsuke (kimono decorations), which he collects. She doesn't mind the age gap and thinks herself incredibly fortunate-- until he takes her to his family estate in Palm Beach, Poinciana. There, his mood takes a dark and sinister turn. He's no longer the man she's married, and every single one of his relatives and staff seems to hate her and want her to leave.

Jarrett, her husband's executive assistant, is sullen and resentful, and though attractive, Sharon can't help but feel hurt and annoyed that he appears to regard her as a gold-digging trophy wife. Ross's daughter, Gretchen, is similarly suspicious and resentful, and drops many hints that Ross's dark side might not be as hidden as he'd like his new wife to think. Gretchen's husband, Vasily, an easy-going European playboy, is the only one who's even remotely friendly, but it's obvious he's got something to hide. Allegra, Ross's mother, helped build the house, but now she's got dementia and is living in a lonely cottage off the property under the care of a servant named Myra while heavily sedated. And then there's Ross himself-- Ross, who's obsessed with her dead mother, keeps a portrait of her in a locked room, and even plays recordings of her singing while they make love. What's wrong with Ross? What is he, and his family, hiding? And why do they desperately want her to leave?

This was just so deliciously creepy. I was never 100% sure who was responsible for the murders and attempted murders, which is always a good sign. Whitney is so good at conjuring up this slow and creeping sense of doom, and while many Gothic romances have the atmosphere down, most of them can't quite manage the mystery. Some of Whitney's books toe the line between Gothic romance and romantic suspense, and I think you could say that this is one of these, although the ramshackle house, secretive family, and mysterious artwork definitely make this more like a traditional Gothic. I can't recommend these books enough to anyone who loves a good mystery-- they're so atmospheric and fun.