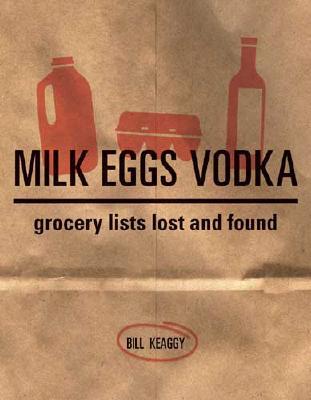 I'm an incredibly nosy person. When I used to work as a grocery cashier, I would always be mildly amused by the things that people would put on the conveyor belt and imagine what kind of lives they lived and what their hobbies were like. And then there were the awkward encounters as well, like the people trying to buy alcohol with no ID, or the time I told someone buying two boxes of condoms, without thinking, to "have a good night"-- and then regretted that deadpan automatic clerk politeness with all my heart.

This book is a collection of "found" grocery lists that were submitted to a guy who keeps a blog about lists. I recently read another "found" book, which were all the rage until online communities went mainstream and people started sharing these sorts of things for free. I liked the grocery lists, because I feel like each one was a little story about the person who wrote it, but after a while, the premise wore a little thin. There's only so many times you can see someone saying they bought milk or eggs before you're like, "SO?"

The saving grace of this book were the little extras thrown in: food trivia and facts, a restored table someone working in a grocery store had covered in decoupaged coupons people had thrown on the floor, a grocery list someone had Chevy Chase autograph in a bathroom, and then a link to a printable grocery list the author made himself on his blog for efficiency, along with some handy recipes for all-American staples (with ingredients found in your local grocery store, wink wink).

As others have said, some of the author's pithy commentaries got pretty annoying. Some people conflate meanness with humor, but I think there's a line before things start to just seem petty, and Keaggy crossed that line multiple times. I was also kind of surprised that he didn't bother translating some of the international lists-- couldn't he find someone who could speak/write Turkish or Tagalog?

This was an OK book but I don't think it's a strong enough concept to really warrant a book in the first place. Blogs are easier because you can just look and view until you're bored of the subject without feeling compelled to read every single post to the end, unlike a book. Might be a funny conversation starter for a coffee table piece, but I wouldn't recommend buying this to read.