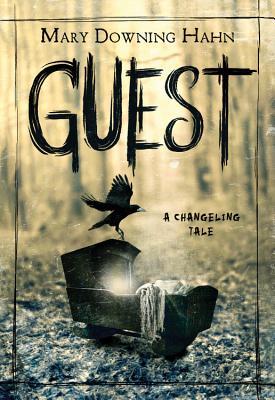 GUEST is a middle-grade novel about faerie folklore, and reminiscent of stories like Mirrormask or Labyrinth, in which the fairy tale is an allegory for a coming-of-age morality play. It definitely reads as though it is written for a young audience, but it doesn't condescend to its audience, either, and would appeal to readers of Diana Wynne Jones or Vivian Vande Velde.

Mollie is the daughter of two peasants, and her parents have recently had another baby, Thomas. Thomas is a beautiful, good-natured child, and her superstitious parents have taken precautions to ensure that his presence doesn't catch the attention of the faeries who live in the nearby forest. Mollie screws all that up, though, by wishing him away, praising his beauty, and then stealing the charm of protection from him because she thinks it's a pretty bauble and selfishly wants it for herself.

Spoiler, as you can guess from the title and the blurb, this does not work out well. The baby is stolen and replaced with a changeling that they end up calling Guest, because he's an unwelcome visitor the family wants gone as soon as possible. Abandoning or killing him is out of the question, because ill-treatment to the changeling means ill-treatment for the human child, so Mollie's father storms out in a man-baby temper tantrum, leaving Mollie's mother to care for him in an increasingly exhausted stupor. Mollie feels sick with guilt, but isn't above treating Guest badly herself, resenting and insulting him by turns, while plotting all the while on how to retrieve Thomas.

The journey element of this was really well done. I liked how this story was steeped in folklore, and it kind of reminded me of this book I read when I was really young, Bruce Coville's SONG OF THE WANDERER. It has that same epic-fantasy-for-kids vibe, which I found nostalgic and appealing. Mollie is a terrible character, though. I hated her. She was so selfish, and stupid. I get that kids can be dumb, but she literally made the same exact mistake 10 times. It was hard to suffer. Guest, on the other hand, is a really great character and by the end of the story, I basically adored him.

Anyone who enjoys middle grade novels or has a kid who enjoys them, and would like a fantasy novel that is easy to read but does not talk down to its young audience will probably enjoy this book a lot. I don't normally go in for middle grade novels, but I thought this was well done and pays homage to faerie folklore in an informed way. It even has elements of Tam Lin, which I liked.