Memes to Movements: How the World's Most Viral Media Is Changing Social Protest and Power by An Xiao Mina 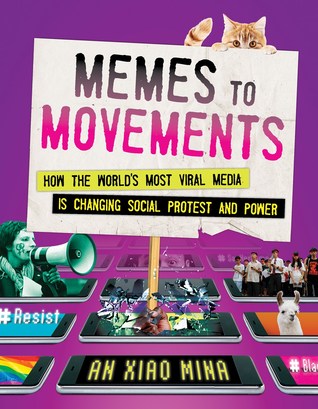 MEMES TO MOVEMENTS is a really interesting book about how memes, and their highly transmittable and salient nature, are effecting political movements and social change. An Xiao Mina presents a variety of memes and hashtags that have been part of huge political movements, including #BlackLivesMatter and #MAGA, discussing their origin when possible, why they're important, and also why memes are so effective in gaining stream and becoming viral.

The author focuses primarily on American and Chinese memes, and to be honest, while I was expecting to be completely lost, I actually ended up enjoying the sections about Chinese memes the most. Two of the most interesting were the Umbrella Movement and the Grass Mud Horse. Because of censorship in China, it can be difficult for protesters to even break through China's firewall, so they have become really sneaky, using characters that are phonemes when pronounced (but contain different tones) or characters that resemble other characters. I had no idea how much subterfuge went on to get a revolutionary Chinese meme off the ground, and it really made me appreciate the cleverness and determination of the people involved in these political movements.

Regarding the U.S. memes, they were more familiar to me, although some of them were still so recent as to be painful. The easiest chapter to read is the one about LOLcats and animal memes. Harder to read are the ones about how the alt-right embraces memes to spread their message and basically sow chaos, and the ones that call attention to the racial injustice that is far too prevalent to this day. I thought the author did a really good job trying to be objective when writing about such sensitive topics, which is definitely not an easy task in this day an age.

I liked the pixel art on each new chapter, but I really, really wish this book had come with illustrations. Maybe they were concerned about copyright issues, or including the pictures would have made this book too expensive for its budget, but I would have really enjoyed seeing illustrations of some of these memes instead of continually having to look up the ones that weren't familiar. Overall, though, MEMES TO MOVEMENTS is a fascinating book and I think anyone who is interested in online politics should read it, because it does a great job talking about people becoming mobilized on social media and how they create and appropriate symbols and hashtags to give their movements more steam.