Midnight on the River Grey by Abigail Wilson 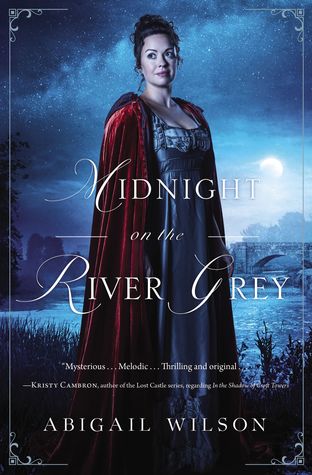 Christian fiction is not usually a genre of books I usually read because I am not religious, and tend to find the overwhelmingly sanctimonious and preachy messages of some of these books troubling at best and extremely uncomfortable at worst. But there's one thing I can't say no to, and that's a Gothic romance novel. MIDNIGHT ON THE RIVER GREY had a great cover and concept, and it had a plus-size model on the front cover. YAAASS

To my surprise, MIDNIGHT ON THE RIVER GREY was not all that religious. I think God was only mentioned in the epilogue, and there weren't any random prayer sessions or recitations of scripture, as many historical christian romances tend to have. Instead, what I got was a fantastic gothic romance with atmosphere and suspense, that managed to pay homage to the squeaky-clean romances of Phyllis A. Whitney and Victoria Holt, while also giving nods to much older favorites, like Pride and Prejudice and Jane Eyre.

Rebecca Hunter is a scrappy young heroine who is a bit of a feminist-- she doesn't want to get married, and she's incredibly smart. When her older brother dies under mysterious circumstances, she decides to investigate his death. Especially when her guardian, a cousin named Lewis Browning, takes her to the reclusive and sinister Greybourne Hall. Lewis is a darkly attractive and intense man, and as with many Gothic romances, there's a suggestion that he might be guilty of murder. When more bodies turn up, and reports of sinister happenings stir among the nearby village, Rebecca is forced to wonder: who might want her brother dead-- and why?

I enjoyed every second of this book. The writing is gorgeous and fits the time period, and given some of the references, was obviously well-researched. I loved the dynamic between Rebecca and her Aunt Jo; they reminded me of Sabrina and Aunt Hilda from The Chilling Adventures of Sabrina. Aunt Jo had that bumbling but capable act down pat, and I was pleased that she got a side-romance of her own. The murder mystery element was also really well done-- I didn't even guess what happened! The final confrontation was suspenseful, and everybody (well, everyone good) gets a happy ending.

Honestly, if you're a secular reader and saw this cover and wanted, but had second thoughts, fear not. Anyone can enjoy this book, and as long as you're not looking for something really racy, I think you'll enjoy it if you're into regency romances and Gothic romances. I certainly did, and think it really captures the essence of its 1960s and 1970s forebears. Definitely recommend!