Genuine Fakes: How Phony Things Teach Us About Real Stuff by Lydia Pyne 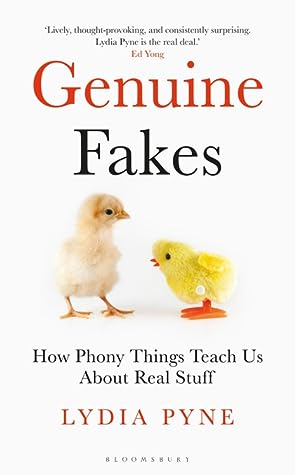 Don't tell anyone, but I briefly minored in philosophy before realizing it was a waste of time. One of my favorite takeaway from those classes, though, was the concept of "qualia," which is the idea that objects have intrinsic qualities that come from subjective experience and can't be explained or faked. That was an idea I kept coming back around to while reading GENUINE FAKES, a collection of essays about fakes, forgeries, counterfeits, replicas, and what it means to be real or authentic. What does it mean?

In the Introduction, she talks about the "Warhol" prints that were done posthumously by another "artist" with his original acetates, as well as his paints and printer. Are these authentic? Without really answering that question, she acknowledges straight up that there are so many examples of "fakes" to draw from in both scientific and pop culture, that she had a lot of trouble deciding on which to select from her book, and ultimately ended up culling several examples, presumably keeping the ones in this book as her favorites or at least the ones that she thought might be among the most interesting.

Some of the topics mentioned in here are, of course, those Warhol prints, but also Shakespeare forgeries, Piltdown Man, naturally formed diamonds vs. those created in labs, nature documentaries, fake fossils, taxidermy, the Grolier Codex, UNESCO sites and replicas, and Banksy. Most of these stories are science-focused, but there are a couple drawn from popular culture, as well. I found all of them interesting, although it's personal my opinion that the chapter about the fossils was a little too similar to the chapter about the Paleolithic caves. Anyone reading this is going to have an example of something fake they can't believe wasn't mentioned and for me, that's reality television. #SoFake

One of the highest compliments I can give a book is saying that it reminded me of Bill Nye for adults, and that's how I felt about GENUINE FAKES. It takes a wide array of historical and scientific subjects and makes them accessible and interesting in the same way that Malcolm Gladwell did for economics and psychology, kicking off a revolution of pop science for the public's consumption. At the very least, it will fill you with a healthy dose of skepticism when it comes to looking at the world around you and determining, as in The Matrix, what is real. There might not be an answer.

With books like these, I always like to end with suggested reading or watching. Cracked has a video about fake documentaries (including the sad one about the lemmings mentioned in here) called "8 Famous Documentaries That Are Full Of Sh*t." Fashion wasn't really touched on here, but if you enjoy this book, you may enjoy Vox's "Why this Gucci knockoff is totally legal." I'd absolutely love to see a follow-up to this book that touches upon more pop-culture-relevant examples of fakes, like counterfeit makeup (a topic covered by Refinery29), fake social media accounts, designer knockoffs, scripted "reality" television, and maybe even plastic surgery. The possibilities are, as they say, endless. How about it, Ms. Pyne? :)