Consent on Campus: A Manifesto by Donna Freitas 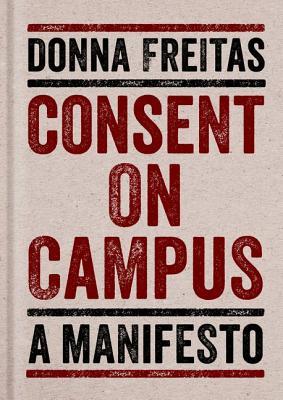 I wanted to like this a lot more than I did, and my rating isn't because I disagree with what the author is saying, but because I didn't particularly agree with the way she goes about it. Freitas is free to write her book the way she wishes, but this is a very dry manifesto and I feel like it's going to be inaccessible to a lot of people because of the scholarly tone-- but her primary goal, as she says in the beginning, is to put this book into the hands of college presidents, since they have so much of a hand in shaping school policies with regard to sexual misconduct, so maybe this is a case of my being the wrong audience.

CONSENT ON CAMPUS is a brief overview of defining consent (or attempting to), emphasizing the importance of having both rules and infrastructure for supporting and upholding these rules in place, and also discussing why rape and assault are problems-- not just on campuses-- and how society's views towards women and hookup culture warp our views about sex and consent in the first place.

I took issue with a few of her finer points. First, she doesn't really seem to like trigger warnings, even though she respects the people who need them. That's fine, since I'm kind of in the same boat. I don't need them, although I understand the desire for them and respect that need. My issue here is that she says it's important for people who have undergone trauma to talk about that trauma, or at least be around people talking about it, and that this is better than doing nothing. Um, not necessarily. Yes, some people need to talk, but for some, talking can make it worse. Speaking as a psychology major, I can tell you that the brain has many defense mechanisms in place to strategically suppress unpleasant memories. In the 1980s, people thought repressed memories needed to come to the surface, mostly due to neo-Freudian theories about the subconscious mind, IIRC, but that isn't necessarily the case. When you forget something traumatic, that's your brain trying to protect you by keeping you safe and sane, and forcing people to relive and remember that traumatic event isn't always ideal.

Second, she talks a lot about how hookup culture contributes to the rape culture, which is true and it isn't. Hookup culture gets kind of messy because you can't really talk about it without also talking about sexual empowerment and the white feminism belief that you can reclaim your sexuality by embracing and reveling the male gaze. Personally, I think that any kind of culture that reduces people to the means to an end in a game of sexual pursuit is inherently problematic on both sides, but that wouldn't be as problematic if everyone playing the game understood consent. It's kind of like how BDSM gets a bad rap because of a few bad actors who get into the scene to abuse people; that's not what it's about, but the bad actors make the news and create a vibe of discomfort and paranoia.

Third, I would have liked more examples-- more case studies, more statistics, more personal stories. This felt so dry, and I really don't think it's going to connect with its audience in a way that will inspire that intense, emotional, "Yes, this needs to change!" feeling that triggers calls to action. We're not logical beings and we're more swayed by our emotions than we are by cold hard facts. I agreed with most of the author's points and I finished the book feeling nothing. That's a problem. I'm sorry to give this such a low rating but there are better books on the subject than this. YMMV.