The Book of "Unnecessary" Quotation Marks: A Celebration of Creative Punctuation by Bethany Keeley 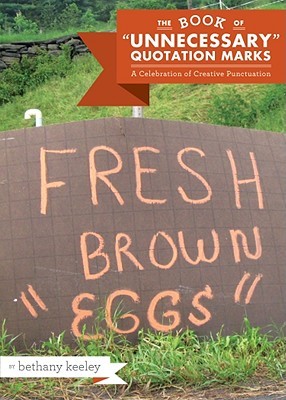 I'm a big fan of novelty books like this one and honestly, if anyone is going to get pedantic about grammar, it's probably going to be me. I tutored Spanish in high school and college, and nothing makes you familiar with the construction and semantics of your first language like picking up a second one. There are a lot of memes floating around making fun of bad grammar, and "UNNECESSARY" QUOTATION MARKS decides to poke fun in particular at, well, unnecessary quotation marks-- especially those used, mistakenly, to add emphasis.

I had high hopes for this book but it was-- dare I say it-- boring. I didn't think any of the pictures were very funny. It's not like the Oxford comma, where leaving it off could potentially change the meaning of the phrase. There are some hilarious examples of that, but one of my favorites is the one that says "The president, a racist, and a misogynist" (with a picture of Obama, a picture of a racist, and then a picture of a misogynist), and then "The president, a racist and a misogynist" (with a picture of Donald Trump). And then there's the problems that arise with leaving out a comma-- perhaps the most famous is "Let's eat, Grandma!" vs. "Let's eat Grandma!" You don't really get that level of hilarity with quotation marks. The author of the book points out that quotation marks are often used for innuendo, sarcasm, and irony, so when someone says "fresh" toast on a menu, there is a suggestion that the toast isn't actually fresh. Yeah, that's amusing-- the first time-- but when you're using that one "joke" (you see what I did there) to hang your coat on, over and over and over again, I hate to break it to you, but that's not stable.

Honestly, reading this book just made me sad because it made me realize how many people who speak English don't have good grammar-- and not necessarily through any fault of their own. And while I do typically enjoy having a good laugh at an improperly written sign, the "humor" (again, you see what I did there) in this book was just too self-congratulatory and mean-spirited in nature for me to really enjoy. I felt like the sarcasm outweighed the crime in many instances, and in some instances, I think the author actually included correctly used quotation marks and just decided to interpret that they were used wrong for her own purposes. For example, there was a sign that said something like "Delicious," but it was over the logo, and under the logo was what appeared to be their slogan. It's okay to put slogans in quotes, and I'm pretty sure the "Delicious!" was supposed to be a quote, or an exclamation, which is also an acceptable use. So that was irritating and kind of hypocritical.

This was not very good, and I wouldn't recommend it, even if you are a grammar stickler.