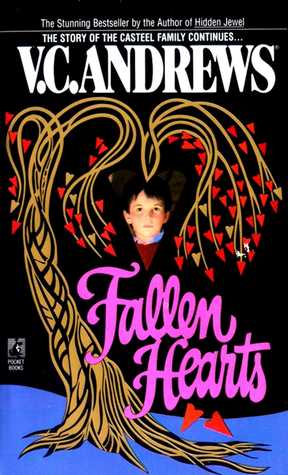 Reading this book was such a headache because FALLEN HEARTS picks up right where DARK ANGEL left off and doesn't skimp on the drama. As excited as I am to binge-read this series, picking up FALLEN was bittersweet, because it's my understanding that this is the first book in the Casteel series that wasn't written to completion by V.C. Andrews, but finished instead by the estate-appointed ghostwriter, Andrew Neiderman. I'm not sure how much he contributed, as the style is still very close to the first two, but it definitely wasn't as good as the previous book.

Heaven finally snags Logan and marries him, but the ghosts of the past won't stay buried. For one thing, she's in love with her dead uncle Troy and his phantom haunts the grounds. For another, her sister Fanny won't quit and Heaven, for some reason, hasn't learned ANYTHING from the events of the last two books and keeps inviting her back into her life again and again, with disastrous results. Then there's Tony, Heaven's father, who played a role in chasing her mother out of the Tatterton household and to her doom. His interest in Heaven is selfish and sinister, for he is a creep.

Like the other two books, this one doesn't skimp on the drama. The second book, DARK ANGEL, is probably my favorite in the series, because it struck a nice balance between realism and sensationalism, whereas this one gets a little ridiculous. I mean, Logan proposes to Heaven with a mansion made out of rainbow ice cream right in the beginning of this one, and it only gets worse from there. I hated him by the end of the book, although I started to hate Heaven a little, too, for her sanctimonious hypocrisy. Troy and Jillian fall into ruin, and Tony and Fanny made me see red-- especially Fanny, who is a lot like Joffrey from GoT in that her sole purpose is to make you mad.

Heaven made so many bad choices-- many of them recycled from the previous books-- that it was hard to sympathize with her as much. I really couldn't understand why she kept Tony and Fanny in her life, knowing what they did and what they were capable of. I was hoping for a Wuthering Heights haunting moment in which Heaven capitalized on her resemblance to her dead mother to haunt Tony and drive him to madness at the end of DARK ANGEL-- which would have been epic-- but that didn't happen then, and it didn't happen here. Jillian is the one who loses it, and it's out of a weird sense of guilt. And then there's Fanny-- I was hoping the trial at the end of the book would rake her over the metaphorical coals, but no, she got what she wanted, just as she always does. What the eff.

I experienced a lot of emotions reading this book, most of them shock and horror. It's tantamount to watching daytime television, so if you enjoy Jenny Jones and the like, this will be your cup of tea. I probably would have rated this higher if it had some of the more satisfying moments of the previous books, but I can't really give four stars to something that left me feeling this frustrated and annoyed.