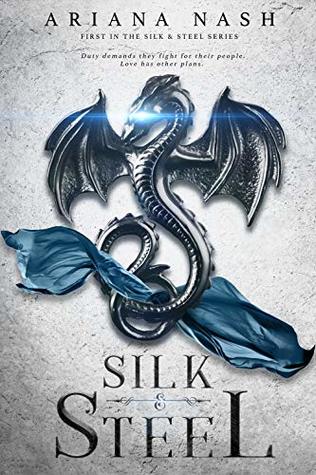 Ever since I read C.S. Pacat's CAPTIVE PRINCE, I've been looking for other dark fantasy books that have that same fantasy bodice-ripper vibe. SILK & STEEL comes the closest of all the other books I've read to capturing that same balance of unapologetic smut and court intrigue, kind of like if GAME OF THRONES was written for the female gaze. Honestly, though, it had me at angsty dragon prince and arrogant warrior elf.

Prince Lysander is the younger son of a sadistic dragon queen who has physically and sexually abused him his whole life. He's treated as "broken" because of his attraction to men, and now she's trying to sell him and breed him with one of the other dragon clans, one that revels in violent orgies. Oh, boy. Eroan, on the other hand, is an elven assassin charged with the murder of Lysander's mother; he would have succeeded were it not for Lysander himself, who was the only one able to cut him down in battle. Now he's a prisoner in the dragons' tower, and finds himself perplexed by the silent, brooding dragon prince who has taken it upon himself to be his gaoler.

I think the most crucial point to mention for this book is that it is NOT for the faint of heart. It has all of the same triggers that CAPTIVE PRINCE did, and a lot of the world-building centers around rape or sexual violence. I didn't feel like the rape was romanticized, and the relationship between the two heroes isn't based on rape, but it is very much present in this book and committed by both men and women alike. There's also incest, which is gross. Nash also doesn't shy away from violence-- the fight scenes in this book are really well done, but part of what makes them so is no small amount of gore.

One thing I really liked is that this isn't GFY; Eroan is bisexual and has had relationships with women. Lysander, on the other hand, is gay and identifies as such; it's a huge problem for him as a prince in a homophobic dragon court that keeps trying to breed him with women. He's subjected to a lot of abuse because of that-- not just from his mother, but also from one of the other dragon clans that ends up drugging him into a stupor so that he'll be too blitzed out of his mind to realize that he's having sex with a woman. I think these scenes might be really hard for some people to read.

On the other hand, I liked that this book was so dark and didn't shy away from getting down and dirty in order to tell the story the way the author intended. It really did remind me of a bodice-ripper, not just because of the darkness, but also because of the globe-trotting adventures, alliances, betrayals, and fight scenes that made a lot of those 1970s bodice-rippers so much fun to read. This book is decently long, and yet the pages just flew by. I was never bored and was always wondering what happened next, and I wasn't even too mad when the cliffhanger I totally predicted happened because I had the other book in the series on stand-by, which I'm going to be buddy-reading with a friend.

If you enjoy dark fantasy novels or bodice-rippers and don't mind books with lots of trigger-warnings, I think you'll really, really like this-- especially if you're familiar with Pippa DaCosta's other work and want to see her try her hand at something different. ON TO BOOK TWO.