The Miracle and Tragedy of the Dionne Quintuplets by Sarah Miller 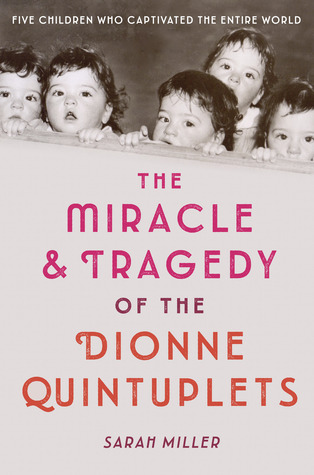 This is a fascinating and tragic story about five girls who basically ended up becoming a sideshow attraction as the wards of the Canadian government. The Dionne Quintuplets, as they came to be known, were five girls born to some low-income French-Canadians. They were two months premature and collectively weighed around 13 pounds. Nobody believed they would survive, at least, not all of them, but due to collective efforts from doctors and nurses and donations from interested third parties, an 18th century incubator that didn't run on electricity was obtained and the quintuplets survived through infancy, childhood, and beyond.

Therein lies the rub-- their survival was part of what made them so famous, because healthcare back then was not great, especially for women's health and natal care. Quintuplets didn't survive. The girls were "kidnapped" (their words, and their parents') from their family and raised in the public view, raised up Lion King style for the paying public's admiration, or else kept in an enclosed play area while (also paying) onlookers observed, Truman Show style.

Eventually, the girls were given back to their family, parents Oliva and Elzire, but their parents were exhausted and resentful of the ordeal, and later, the girls claimed they weren't treated well. Elzire, their mother, allegedly looked for reasons to be short with them and occasionally used physical corrective methods. Oliva, on the other hand, they claimed sexually abused them, and made them terrified to be alone with them. A statement that the Dionnes' other children mostly denied, although it seems at least one of them had observed enough suspicious behavior to be slightly credulous.

Reading this book was quite the rollercoaster. At first, I felt sorry for the parents, for the way they were mocked and made fun of by unsympathetic newspapers. Later on in the book, I read the girls' accusations against their parents with a shock that was like being splashed with cold water. I felt sorry for the girls, whose childhoods were essentially taken away from them; fame is a heavy burden for a child, especially when the guardians are the ones lining their pockets from the gains. Later in life, they also suffered-- not just from the abuse which may have taken place, but also from corrupt guardianship that resulted in their trustfund being leached by the government, their parents, the doctor who "saved" them and then took all the credit, and basically anyone else who had access to it and saw the girls' money as an easy write-off. They never got a break, and that is truly awful.

I had heard references to the Dionne Quintuplets and seen some of the ephemera associated with them without actually recognizing what it was. There's also a Simpsons episode that appears to mock the financial straits of the parents and greediness of their guardians, which I believe is called Eight Misbehavin'. Reading this book gave me context for that. I think if you're interested in biographies and the effects of fame on children, you would be interested in this book, too. It's definitely not an easy read, emotionally, but I was too fascinated to put it down. Also, there are two sections of pictures, which I always enjoy in a nonfiction book about history. I had an ARC, so they were not super high quality (printed on thin paper), but I imagine they're going to look great in the finished copies, as even in this format, they were interesting to look at and looked fairly high quality.