Truth Worth Telling: A Reporter's Search for Meaning in the Stories of Our Times by Scott Pelley 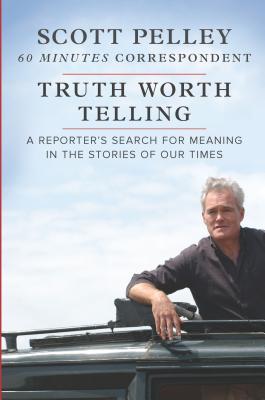 The opening essay in this collection of journalism pieces stitched loosely together to create a nonlinear memoir was one of the most difficult pieces of writing I've struggled to get through in a long time-- not because the writing was dense or hard to understand, but because it was so distressing, and so evocative of one of the most tragic moments in the recent history of the United States. Scott Pelley was at Ground Zero during 9/11 and writes about those who survived and those who didn't. I read this on the bus and had to struggle not to cry when he wrote about all of those innocent people who died going to work, and the many brave emergency response people who died trying to save them.

Luckily, not all of the essays are this hard to read, but this is not a joyous or uplifting memoir, as Pelley focuses his efforts on critical moments of his field correspondent career that represent major turning points in history. Among this collection, he writes about the censorship of journalists and the dangers of the Gulf War, the Iraq War and the murky political waters from which it surfaced, his admiration of Hillary and his skepticism of Trump during the 2016 election and the failures to reach the frustrated blue collar middle class, the parents of those who died in the Sandy Hook tragedy, his two completely coincidental encounters with the Oklahoma City bomber, the abuses of power during the Patriot Act, and Bill Clinton's fall from grace.

Pelley is a great writer. Of course, you would expect nothing less from a journalist, but I think the rush to print and to be first has sometimes resulted in quality being sacrificed. I've noticed an increase in typos and post-publishing corrections and edits being added to articles, and while I think transparency and correct information is important, sometimes rushing to print means that the first to read the articles are also the first to walk away with factually incorrect information if there's an error. He's great at communicating a scene, and treating his subjects with nuance and care. Sometimes his job meant he went to dangerous places, and his description of fleeing Chinese officials trying to confiscate his teams' camera equipment and the high-stress nerve gas drills in the Middle East made me really, really glad that I don't have his job, as I don't think I'd be able to work in that pressure.

If I have a criticism, I think it's that Pelley can come across as too arrogant and idealistic. There's a lot of self-patting on the back, and the putting of journalists on pedestals as if they are the patron saints of truth and worthy of an entirely separate branch of government worthy of their own checks and balances. I get having pride in what he does, and the contributions he's made to history, but that arrogance was hard to read at times, and I found myself skimming some of the more self-adoring passages. Likewise, this book is very military-oriented, so some of the passages sometimes end up sounding similar. I don't know much about the military and am not particularly interested in it (even if I do respect what our servicemen do), so I tended to skim these passages lightly as well.

Overall, though, TRUTH WORTH TELLING is a really excellent and heartfelt collection of journalism as memoir, and I think it would be great for anyone who wants to know more about recent political issues and how they've contributed to the current political climate, and would serve as a good tool in a classroom for kids to learn about important political events in a relatively neutral tone. If you're interested in politics or journalism, or just happen to like watching the evening news a whole lot, you should pick up this book.