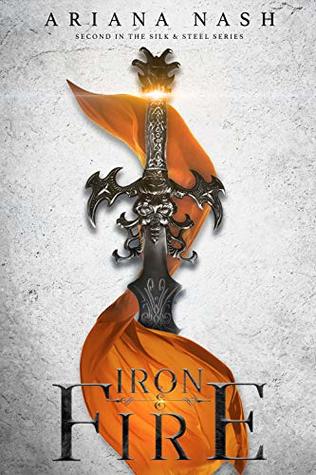 Whoa. That was one of the more difficult books I've struggled to get through in a while-- not because it was bad, but because it was so unrelentingly brutal. After finishing this, all I could think was, Game of Thrones, eat your heart out, because there's a new bad bitch on the block. Only since this is about a bisexual elf and a gay dragon, I guess you could call it Gay of Thrones. Or, my favorite alternative title: Lysander Can't Catch a Fucking Break.

IRON & FIRE continues where the first book, SILK & STEEL, left off. Humans, dragons, and elves are at war. Eroan, the elf, was captured when he tried to assassinate the dragon queen. Obviously, that failed, and he ended up as the prisoner of the royal dragons. Lysander is the young prince, and the black sheep of the family because he's gay and unbreedable and also because everyone thinks he's sniveling, weak and pathetic. He drowns his shame in alcohol, but after meeting the elf and seeing him remain unbroken, he starts to want to drown in something else... like that booty. The feeling even seems like maybe it's mutual.

Of course, this is not your mother's romance novel, and absolutely nothing works out. There is rape, slavery, torture, violence, incest, and abuse, and basically a whole entire rainbow of trigger warnings. The book ends with both leads apart and hating each other once more because of a betrayal. Eroan must return to his people as an outcast to convince them to fight the dragons, and Lysander ends up being an abused and broken plaything, only to be reborn like a phoenix from flames as a fucking death machine fueled by Kill Bill levels of revenge and rage, including a certain elf.

The plotting and the reveals in this book were really great. Second books often end up falling short because they end up as placeholders for the series finale, and have mostly expositions and padding. Not this book. There were expositions, yes, but it was an entire roller-coaster of W-T-F getting there, and if you thought the first book was dark, this one is where Nash really snuffs out all the lights.

Knowing what I know now about the dragons, I'm dying to see what happens in the last book. I can't wait for the epic showdown I know is going to happen. I keep hoping Lysander will catch a break, or six, and that Eroan will get his head out of his ass long enough to realize that he doesn't really know everything. Also, I actually don't want Akiem to die. He's a psycho dragon, but he's my psycho dragon, and he's one sexy mother-fucker (literally, yikes) of a villain and I'm kind of obsessed. You should see his fight scenes and read some of his one-liners if you don't believe me, damn. He's fire. 🔥

P.S. I buddy-read this with Maraya, and you should definitely check out her review. 🐉