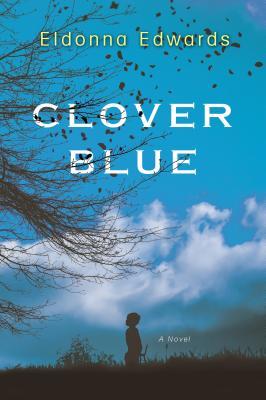 CLOVER BLUE is one of those books for an adult audience that's narrated by a child. Sometimes this works, but far too often it comes across as overly pretentious and lame. Sadly, CLOVER BLUE is one of those latter examples. I didn't think that a book about a hippie commune with sinister motivations could possibly be boring. Maybe if I hadn't recently read THE ASH FAMILY, which was basically a better version of this, I wouldn't have been so dismally disappointed. Maybe if the characters hadn't been named things like Doobie, Goji, and Aura, I would have been able to take this book more seriously. There are a lot of maybes.

Clover Blue lives in Saffron Freedom Community, a hippie commune in the San Francisco Bay Area, let by a creepy dude named Goji who brags about his travels to India and acts like an obnoxious Philosophy major. Clover likes his many sister-mothers, who have raised him, and admires and wants to be like Goji. But he's also really curious about his family before he came to the commune, the people who abandoned him to these pot-smoking weirdos who believe in free love.

Precious narrative aside, this book had a couple other major flaws. First, it's boring. Nothing happens and none of the characters are interesting enough to make this a compelling character-driven story. Second, the twist at the end was super lame and felt about a zillion different kinds of contrived. Third, a total lack of closure and accountability. That is another way that THE ASH FAMILY beats this book. With TAF, I got a sense of closure, a sense of character development, and a sense of justice. With CLOVER BLUE, I got... wishy-washy, I don't want to commit. Are the hippies the good guys or the bad guys? Edwards wants them to be both, and the end result is a disaster.