Audience of One: Television, Donald Trump, and the Fracturing of America by James Poniewozik 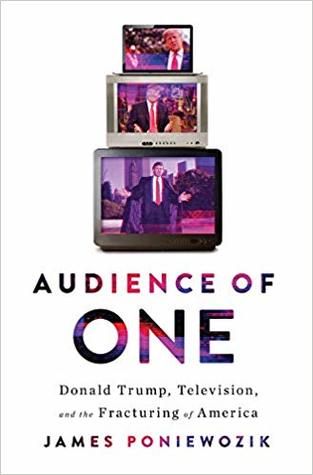 AN AUDIENCE OF ONE is an interesting book that is part biography, part election postmortem, and part pop-cultural essay that explores Donald Trump's manufactured on-screen persona and the shifting attitudes of the American populace that put him on screen and made him an appealing candidate to so many disenfranchised voters in the first place despite any serious political experience and problematic views towards everything.

Author James Poniewozik chalks Trump's appeal to his base and "entertainment news" up to three factors.

1. A view towards how we view the rich. Trump is, as Fran Lebowitz famously said, the poor person's idea of a rich man. Being working class and pulling yourself up by your bootstraps used to be the ideological mantra of the United States, but that's shifted a lot, due in part to how entertainment has portrayed rich people and a culture that suggests that you can become very rich and famous for doing very little (Kardashians, YouTubers, etc.). Trump does not contribute much value to culture or to industry or to academia (and, indeed, has boasted as much in some cases), and to disenfranchised people who don't have jobs they want, and are blocked by doing so from factors out of their control, these "temporarily embarrassed millionaires" (John Steinbeck) find Trump's lifestyle of tasteless conspicuous consumption incredibly appealing; it's all the trappings of wealth, but with no class.

2. A view towards how we view antiheroes. Poniewozik cites many examples, notably Tony Soprano and Archie Bunker, of men who are not good people, and yet are the "heroes" of their own stories in entertainment. There is some degree of cognitive dissonance when watching such characters speak or act: you know that what they are doing is bad, but get some pleasure in watching them misbehave. That pleasure drives viewers to root for that character, if only so they can see what they're going to do next. Reality TV is a prime example of this, and The Apprentice, you could argue, is the poor man's envisioning of what corporate culture is like: polished facades, no serious work being done, and everything revolving around a pompous jerk everyone sucks up to who gets to say "you're fired."

3. An ideological shift in the right wing. Conservatives rallied against Obama's election and basically became a party of obstruction, and instead of having a solid platform of ideas for progress and change, they became the "NO" party that dragged its feet and resisted change of any kind. If you look at graphs of liberal vs. conservative attitudes, you'll see that while liberals have gotten a little more liberal over the years, conservatives have become way more conservative. Vox media recently did a video about this, and it's called asymmetric polarization. Trump appealed to people who were becoming increasingly offended by what they perceived as a liberal door shutting them out of their country. If you're privileged and have gone about life having that privilege unchecked, equality is going to seem like things are being "taken away," even if what's really happening is that people who are different from you are just getting the same opportunities you always took for granted. The "MAGA" slogan allowed these individuals to imagine a time when they didn't have to worry or care about what anyone else thought of their actions, and they didn't have to be personally accountable to the effects of these thoughts and actions on others. It was built on selfishness and intolerance, without ever actually explicitly saying either of those two words. It is, essentially, the "Me, Me, Me!" party.

AUDIENCE OF ONE is a really difficult read because what it is is essentially a study in narcissism, both in Trump and the people who voted for him. There was a glut of articles and click-bait after Trump became president analyzing both him and his voters and trying to figure out How This Happened, but this book isn't quite that. It's more of a series of essays that do a cultural deep-dive into the factors that made the United States so detached and jaded as a viewing audience, and the type of leader that might appeal to someone who votes for a bad candidate just to "shake things up."

I liked this book but I do think it goes on a lot of tangents. There are huge swaths of this book that are about reality TV, anti-heroes in television shows, and various other things. To his credit, Poniewozik always ties these apparent narrative wanderings back to his original topic, but I think it made this book much longer than it had to be. I will say, though, that this book has what is perhaps one of my favorite descriptions of Trump: "a self-inflated gold-lamé balloon high on his own helium." YES.