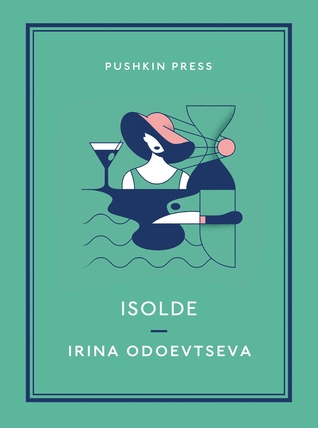 ISOLDE is a work of Russian literature originally released in 1929. Apparently it was quite controversial in its day, which isn't surprising, as it comes across as very progressive for its time with regard to its frankness of writing about sex and the flouting of convention, as well as a surprisingly decent portrayal of an F/F character that was unexpected.

Liza is the daughter of a vain social climber named Natalia, who makes Liza, Odette, her other daughter, and Nikolai, her son, all pretend that she's actually their older cousin, and they are forbidden from calling her "Mama." Natalia is carrying on with two different lovers-- one spineless and weak, the other predatory and cruel. They are a family of White émigrés from Russia taking refuge in France. While there, Lisa meets a handsome young English boy named Cromwell who has just read Tristan and Iseult and sees Liza as the beautiful Isolde.

From there, this book almost becomes an F. Scott Fitzgerald novel as Cromwell takes Liza and her siblings out around the town, wining and dining them, and regaling them with his otherness and his money. But then the money runs out, and Liza becomes terribly bored. She is fourteen in this novel and acts every inch of it, with all the fickleness and depthless emotion that I remember experiencing from my own teen years. She loves and hates with passion, shifting from one to the other, and grows bored quickly.

Towards the end of the novel, things start to get a little surreal. Natalia's relationships become more tempestuous as the wife of one of her lovers catches on to their affair. Liza grows older and more beautiful, and finds that her mother likes her less as other men begin to like her more. Tensions in Russia reach a fever pitch as the country teeters on the brink of revolution and Liza, wanting something to live for, begins to wonder if the answer might be having something worth dying for.

As far as I can tell, this is a somewhat loose interpretation of Tristan and Iseult set during the Jazz Age, only with a different ending. It's a very loose interpretation, perhaps more homage than retelling. I think more than a literary retelling, this is social commentary on coming of age in Europe, as well as commentary on social class and the moral indolence of jaded, disaffected youth. The writing is gorgeous and the translators did an excellent job catching the "tone" of novels written in this time period. If you're a fan of William Somerset Maugham, F. Scott Fitzgerald, or Edith Wharton, I think you will probably enjoy this book for its portrayal of the ennui of the upperclass.