Held by Kimberly A. Bettes 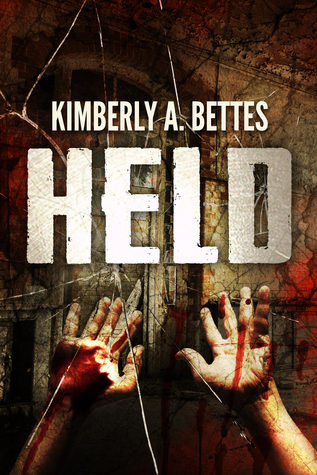 First, a caveat. This book is dark. I don't think I've read or watched anything so horrific since The Collector (the one made by the Saw guy, not the one based on the John Fowles novel) or maybe since the tail end of Stephen King's MISERY. HELD is about people-- women-- getting tortured in incredibly brutal and graphic ways, and it was almost too much even for me. I think I was able to prepare for it since the negative reviews for this book were so detailed and helpful, so keep in mind that if this is a sensitive point with you, you should steer clear of this book.

That said, I actually liked HELD a lot more than I was expecting to. It's funny that this appears as a suggestion for my work because I actually had an idea similar to this-- although nowhere near so well-thought out. Nicole is just an ordinary wife and mom until she is abducted at gunpoint in a grocery store parking lot. Her captor is a man named Ron, averagely good-looking and 100% psycho. Ron finds Nicole amusing, and decides to keep her as his own. A fate that seems horrible until she finds out about the other women he keeps downstairs, the ones he calls his "basement bitches."

Ron is a failed author who wants to try again. This time, he's decided to do research for his horror novel-- by committing the horrific acts himself. He's certain it will be a best-seller. He has moments of being charming and funny that are quickly eclipsed by calculated acts of sadism. He claims to want Nicole's love, but not even she is safe from his whims. She knows she has to escape, but she isn't sure how, and time is running out, as Ron's novel is close to being finished...

So, if this had been brutality for the sake of brutality, I probably wouldn't have been able to finish. But this was more of a (very violent) work of psychological suspense, as well as a survival story. Nicole is funny-- it's clear to see why Ron decides to keep her-- but she's also selfish and a little cruel in her quest for survival, and she's forced to see the very worst of herself as she does what's needed to survive. I sped through this book pretty quickly wanting to see what happened. The book doesn't quite end on a cliffhanger, but it doesn't have the closure I need, either. I guess we have to get the second book to see whether or not Nicole gets to have her revenge.

If you can stomach dark and gory reads, you might like this. It's not for everyone but it has a really great story line with fast pacing and definitely creeped me out. I'll probably read the sequel. :)