Americana (And The Act Of Getting Over It.) by Luke Healy 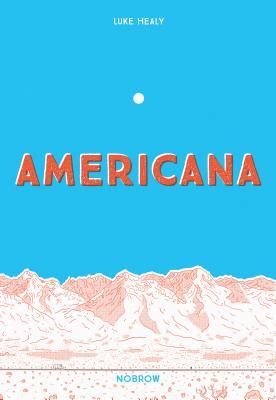 AMERICANA is a graphic novel memoir about an Irish man who hikes the Pacific Crest Trail after being inspired by Cheryl Strayed's WILD. He starts at the Mexican-California border and goes all the way up to the Canadian-Washington border. During this trek, he meets a number of colorful characters who all go under a hike de plume, which makes them seem a lot like spies from a 1950s sitcom-- or hippies. In this graphic novel he chronicles his journey and how it changed him, and what this trek taught him about himself and his ability to endure.

I liked this a lot considering I have zero interest in the outdoors. I'm an environmentalist in that I try to make conscious life choices that will benefit the wilds and preserve them for the next generation to come, but I would also like said wilds to stay far away from me, preferably on the other side of a luxurious glass viewing window or on the other side of a TV screen. Reading this book definitely reminded me why I hate hiking and camping and doing anything away from a working toilet and AC.

Healy has a simplistic style in three colors, red, white and blue, and while it took some getting used to, I did like his style. He also has a lot of text in here-- more than I was expecting for a graphic novel. When describing this book to people, I called it "INTO THE WILD with a happy ending." I think this graphic novel will especially appeal to young boys because it's a success story about a man who began this exercise out of shape and slightly overweight and considered giving up several times, only to persevere, even when he was at his limit. I thought that was very inspiring.