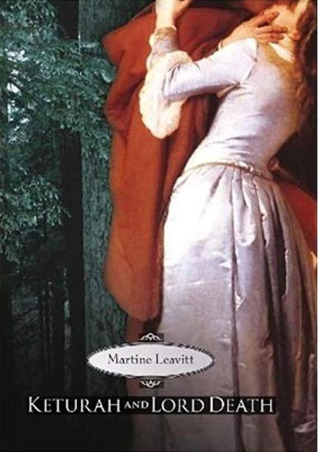 This is a charming story reminiscent of some of Gail Carson Levine or Margaret Peterson Haddix's work. It's a fairytale that borrows from Beauty and the Beast, 1001 Nights, as well as the Persephone myth from Greek mythology, telling the story of a girl named Keturah who follows a hart into the woods and ends up meeting Death. To her surprise, he isn't the grim horror she imagined, but a beautiful man, and he has demanded that she return with him to the underworld. But Keturah is not ready to leave, and so she decides to borrow more time with a story.

In addition to the will she, won't she? element of the tale she tells to save her life, Keturah's medieval village is in the midst of some major turmoil. Her two friends are trying to help her find the love of her life (but also secretly looking for their own), and Death (and death) are omnipresent due to poor living conditions, child birth, and plague. The story broadens to include the circumstances of many of the townsfolk, who end up playing major roles in the choices Keturah makes, including a game-changing one at the very end.

I've been wanting to read this book for ten years, and I'm afraid I hyped it up pretty heavily in my own mind. It didn't quite live up to expectations. The tone was a bit uneven-- parts were very dark, and other parts were light, almost fluffy. They didn't quite mesh. And as much as I loved the writing style, and admired how the author was able to capture that "timeless" fairytale element that only Disney really succeeds at these days (side note: this would make a great Disney movie), Keturah was a raging Mary Sue and her only personality characteristic was wanting to find true love and being impossibly beautiful. So, actually, just like a Disney Princess.

For younger audiences, I think this book will be much more successful. I actually read a story with a similar storyline, only for adults, called THE DEMON OF DARKLING REACH, and this book really could not compare. It was just a little too young for me, even though it deals with some mature concepts in a really thoughtful way, like coming to terms with mortality and trying to force fate. That ending though-- it really yanks at your heartstrings. I almost wanted to give it an extra star for the ending alone. So good.