The Black Prince: Part I by P.J. Fox 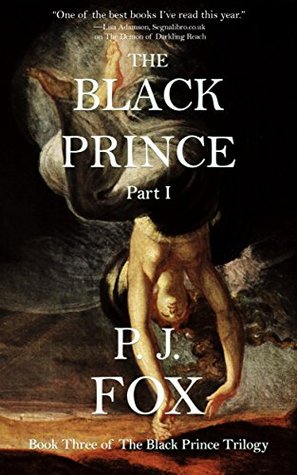 I'm annoyed, because this series started out so good and then it was like everything that made this series really good and unique was removed in this latest installment. THE DEMON OF DARKLING REACH was a slow-burn romance with danger and rich world-building. THE WHITE QUEEN developed that world-building further, and even though it was a little slower than the previous book, I liked getting insight into Tristan's mysterious backstory and seeing his dark kingdom teeter on the precipice of war.

In THE BLACK PRINCE: PART I, Tristan and Isla are married and Isla is trying to resign herself to no longer having a mind of her own. She was such a strong character in the first book especially, and now she is just a pale shadow of herself, subservient and unhappy, but seemingly unwilling to take action to remedy that. This is a woman who ran an entire castle herself and relied on wit and reason to get by, since everyone else was writing her off as the "ugly" sister. It was this wit and reason that ensnared Tristan in the first place, and I was very unhappy to see all of that determination and sparkling wit disappear.

Hart is the focus of this book, relegating the other characters to the background, and while that is fine, it was weird seeing a previously supporting character suddenly become the main character. The author did something similar with Tristan in the previous book, having his prologue make up 1/3 of the story, but that at least made sense since he was the love interest. The focus on Hart felt more like filler, since he was kind of irrelevant before. But Hart is now Tristan's right hand man, and feared in his own right as a ruthless soldier and torturer who brooks no defiance or treason. Power and allegiance to Tristan has brought out his darker tendencies and made him positively demonic.

Sadly, I actually liked the secondary romance between him and Lissa more than I did the romance between Isla and Tristan. Now that the two of them are together and playing house, it feels like they're going through the motions and have a very passive, very Edward and Bella sort of romance.

I actually ended up skimming large portions of this book because I was so frustrated. Reading this reminded me of GAME OF THRONES, and not in a good way-- it started feeling like a derivative fantasy novel that was being grimdark for the sake of being grimdark, and keeping obnoxious characters alive purely to have them annoy the hell out of you until they could be cathartically killed at the last possible moment (I'm looking at you, Rowena), regardless of how much it didn't make sense. Isla knew what Rowena is capable of, and had so many opportunities to get rid of her. Also, her father was AWFUL. I hated him in the previous books and thought him a weak character, but in this book we find out how wretched he really was. If you ask me, he got off way too easy. :|

I'm not sure I'll be returning to read the second part of this book.