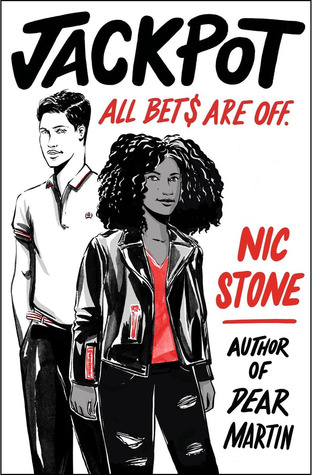 JACKPOT is the story of a teenage girl living about an inch above the poverty line. She works at a convenience store clerk which is how she ends up meeting the woman who bought the winning lottery ticket and also the rich young heir, Zan, who ends up playing willing accomplice to her heist to notify the woman of her good fortune and, perhaps, get a cut of that sweet, sweet cash.

I haven't read anything by this author before, although I do actually own her other book, DEAR MARTIN, and I had a lot of mixed thoughts while reading. Ultimately, I do think I liked this book-- with reservations-- which I'll list out here.

✔️ Realistic portrayal of what it's like living paycheck to paycheck. I think a lot of YA and NA try to romanticize being low-income, like you have no cred if you aren't starving. It's always for a sacrifice or a cause and I hate that, because I think it feeds into the (mistaken) belief that people without money have done something to deserve that. Rico's struggles to provide with her family and their sacrifices really hit hard. I liked that a lot.

✔️ Diversity everywhere! Rico and her younger brother are biracial and so, actually, is Zan. There's a lot of interracial families in here, and lots of discussions about culture and not a whole lot of bigotry, while somehow also managing to talk about privilege and discrimination. I think it's a very positive rep, for the most part, and I really liked that a lot. I think a lot of teens probably will, too.

✔️ Female friendship. Jessica was a great and supportive character, and so was her boyfriend, Ness. The two of them as a couple were very cozy and I liked their interludes.

✔️ A good heist story. I like the idea of kids going on adventures to win money. Adventure stories were really big in the 80s and 90s and then kind of tapered off. My generation grew up with those types of stories so it was nostalgic to see a similar one, but wearing grown-up clothes. #YAS

❌ The weird interludes with inanimate objects. There's all these micro-chapters narrated from the point of view of inanimate objects (money, houses, pieces of paper, etc.). I didn't like that. It was a bit too surreal and precious, and kept yanking me out of the story. Whatever the author was going for, it didn't quite work and I wasn't a fan.

❌ The "sarcastic" humor. Same problem with the inanimate object interludes-- it felt like it was trying too hard. There were a few moments of genuine humor in here but it felt like Rico had to have a retort for literally everything and eventually it got exhausting and annoying. Rico was not a very nice character and while I get her struggles, she was really hard to like. I never warmed up to her, especially at the end when she reveals her true colors as to how far she'll go to get the winnings.

❌ The romance. I didn't really buy it. I didn't like Rico, so I didn't see what Zan saw in her and why he took all her attitude and meanness. It wasn't a very positive relationship. Zan had problems too and was too pushy and privileged and sometimes sexist, but he didn't make me recoil the way Rico did with all of her actions.

❌ The ending. Not going to say anything else on this because spoilers, but yeah.

This wasn't a bad book and ultimately I did end up liking it more than I disliked it, but it won't be topping any of my favorites lists any time soon. I think people will either love or hate this one, tbh, depending on how they feel about the main character and her "humor."