Tikka Chance on Me by Suleikha Snyder 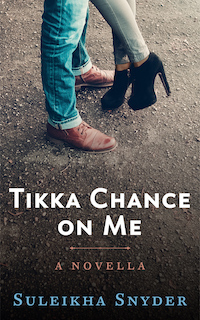 I bought this because it was only 99-cents and because I kept seeing it get mentioned on Twitter. I thought the title was great (I'm a huge fan of bad puns, the more cringe-worthy, the better) and as a fan of Indian food myself, I thought the idea of a girl working to help out her parents' in their Indian restaurant seemed really charming. I always like it when heroines have jobs or hobbies that exist outside the sphere of the hero. Everyone needs a hobby, you know.

Trucker is the head of an MC club called the Eagles and Pinky's Indian restaurant is their hangout. Pinky's always sort of had a crush on Trucker, even before he joined the MC, but the idea that he's probably involved in criminal undertakings (she's seen Sons of Anarchy) puts her off. This being a short story, it doesn't put her off for too long and before we, the readers, know it, Trucker and Pinky are doing it dirty in a car.

The writing in this book is good and I know the short story format doesn't really allow for heaps of development, but it was still shallower than I would have liked. I did like the sex scenes, though, and I think it's very important that the heroine was so experienced and assertive in her sexuality, and appreciated the discussions of double-standards and slut-shaming that the author threw in here. Trucker was also more decent than I was expecting: guys, this is the most "woke" motorcycle club guy you're ever going to encounter, although there's a reason why, you'll find out later.