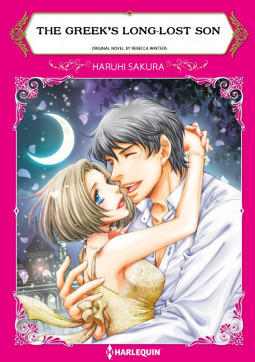 Harlequin romances would have you believe that Greece's population is 90% millionaires. Their GDP seems to be incredibly lavish wedding parties of their countrymen to enterprising jeunes filles. #TheMoreYouKnow

THE GREEK'S LONG-LOST SON is one of those titles where the summary of the book is in the title. Pretty self-explanatory, but let me explain anyway. Stella is the daughter of a powerful businessman, and a rich heiress. None of her family, with the exception of her kindly brother Stasio, approve of her relationship with the son of struggling restaurant owners, Theo. When she finds out that she's pregnant, he seems happy, and they plan to elope, only for Stella to find out that Theo absconded when offered the princely sum of $100,000.

Flashforward to the future where Stella is now a strong independent single woman living off the charity of Stasio, with her young son, Ari. She's happy but tortured over the way things used to be, when she conveniently gets a phone call from Theo summed up basically as, "Bitch, I'm rich now and I'm still sexy AF. I want to see my son." The meeting goes... surprisingly well, and Theo seems to like his son, but Stella, of course, manages to ruin it because she blames him for the past without talking to him about the Big Misunderstanding and of course the hero doesn't want her to realize she lives in a family of garbage monsters, so he suffers silently and says nothing while taking a big one for Team Trash. No flaws in that plan.

The book ends with a final showdown between Theo and Nicolas, the not-so-nice brother, where the truth finally outs and Stella learns the importance of asking questions instead of swallowing down your family's lies with the eagerness of a Trump supporter watching FOX News rail on about the so-called "Deep State" (ooooops, did I say that aloud? My bad). There's a happy ending. It was actually... happy. I didn't hate Theo. I was a little suspicious of him, and my d-bag alarms were on full alert, but nothing tripped my sensors. He was actually a nice guy. He didn't even clock Nicolas, which I would have accepted (despite my dislike of violence as the answer) because Nicolas totally deserved it - and actually, that was the one sour chord in this book. At the end, Stella has her fairytale ending and finds out her love has been redeemed, but she's like, "What about Nicolas? I wish he was here." Bitch, is your name Apple Jacks? I mean, are you freaking cereal? Did you not SEE what he did? I mean, really, at some point you have to decide when to write someone off. That was lame.