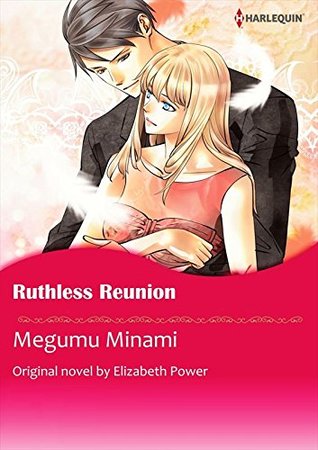 So, real talk: I had an interesting time getting this as an ARC. As you know, I'm basically the unofficial queen of Harlequin manga, having reviewed 40+ of the damn things at this point. They're basically josei adaptations of popular Harlequin Presents books, as if romance novels needed to be condensed into addictively snacktastic tidbits like the book equivalent of a bite-size snickers. (Read: Yes, yes, they did.) It boggles my mind why they aren't more popular, but most people don't seem to realize they are a thing yet despite my efforts, which leaves it to me to champion the cause and rally the troops, er, readers.

Recently, a batch of 10 or so of these showed up on Netgalley and I applied for them all without really thinking twice about it, since usually Harlequin gives me whatever I want. I'm a bit pressed for time these days and don't always read everything I'm given, but I do review everything I read, and I have always reviewed all of the Harlequin manga novels I was given, so maybe that's why I was approved despite being Trash™.

Anyway, this time - I wasn't approved. For anything. Ouch. I think the last time I got that rejected, I was getting the "we should just be friends" speech from someone I liked. Ouch. Harlequin, I thought you were down with happy endings and reuniting people with their true loves. How could you deny me my fated destiny with your glorious love-trash? Was it because I call them trash? I call everything I love trash, basically, including myself. And trust me, I love myself. (Not like that. Perverts.)

While I was still smarting from rejection (and still trolling on Netgalley, because even though the last thing I need is more books, well - I still need more books), I noticed that another twenty Harlequin manga had been added to the site. Once again, I applied for all of them, although less cockily this time. And then I went on Twitter and sent them a "Hi, I'm Nenia "Do You Know Who I Am" Campbell" Tweet. Lol JK, I might come across as an a-hole in some of my reviews but I am a benign trash person and wouldn't leverage my reviewing cred for favors because that's real dumpster status . This was more akin to standing outside their headquarters with a boombox blasting "Why Can't We Be Friends?" by Smash Mouth. I get it, you know. I don't use Netgalley with the diligence that I probably should, and my review ratio is trash. That's on me. But these, I would actually review.

Days go by, and I'm hoping that I'm not going to be rejected for everything again because - ugh, my heart. I check my Netgalley dashboard the way a parent stalks their teenager's Instagram, and finally, finally, I hear back. Freaking Harlequin declined me for every single book I applied for but ONE. This one. I couldn't believe it. I checked through all the titles and sure enough, declined. Declined. Declined. I'm not sure if someone is trolling me (LOL, Nenia, this time we didn't decline you for everything), or if this approval was an accident as a result of someone failing to hit the 'decline' button they seem to love so much, but it looks like some serious grade-A trolling on HQ's part.

And honestly? I'm not even mad. Confused, Amused, and Bewildered, but not M-A-D.

I'm not sure what made me eligible for RUTHLESS REUNION when so many of the other books I applied for failed to make the cut. The ominous title could be an extra attempt at trolling, as Harlequin "ruthlessly reunites" me with my coveted HQ manga, only in a Monkey's Paw-esque "joke's on you, I only gave you half of what you asked for" sort of way. But by gum, I was approved this one Harlequin manga by Netgalley & you can be damn sure I was going to read the hell out of it.

Sanchia and Alex have a connection that she ends up running from, and she turns up as a juror in the courtroom over which he presides as judge, he's shocked to see her there. Especially when she claims she doesn't even know who he is. As it turns out, Sanchia has ~amnesia~ and has conveniently forgotten that she and Alex have a whole slew of history together, including marriage. Eventually she remembers and we're treated to a whirlwind of her memories. Here, the conflict switches from "How does he know me?" to "Why doesn't he love me?" And faster than you can dial 1-800-BIH-CRAY, she's preparing an epic flounce, when five minutes of conversation would sort things out right quick.

The non-linear timeline was confusing and not done particularly well in this format. I thought the art was okay (albeit kind of boxy) and some of the speech panels leaked out into other panels, which I guess was supposed to be artistic but actually made reading order kind of difficult.

I thought RUTHLESS REUNION was OK. It's definitely not one of my favorites, but I wasn't mad at it, either. I'm a sucker for a good amnesia plot. I just wish the characters had been better fleshed-out. Sanchia just didn't have much in the way of a personality, which made her hard to root for.