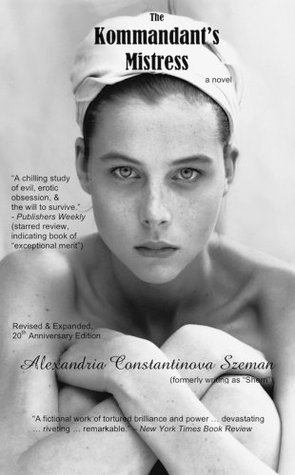 After reading Amy Harmon's FROM SAND AND ASH, I found myself still thinking melancholically about WWII. Reading something super cheery or fantastical felt kind of disrespectful while in this mood, so I decided to delve into the bottomless black hole that is my Kindle for another book on the subject.

THE KOMMANDANT'S MISTRESS has been on my wishlist for a while. It's listed as a suggested read for people who also liked Margot Abbott's THE LAST INNOCENT HOUR, a book that dug its talons into my soul and absolutely shredded me. Reading THE LAST INNOCENT HOUR not only put me in a book slump, it left me feeling emotionally drained and haunted. There are scenes in that book I can't get out of my head. I'm sometimes skeptical about those AI-generated suggestions, but reading the synopsis of THE KOMMANDANT'S MISTRESS seemed like it was probably about right. However, the mixed reviews intimidated me a bit, and I only ended up buying this book just last week when it appeared on sale for a much more friendly $0.99. At that price, I'll read anything.

THE KOMMANDANT'S MISTRESS is definitely the perfect read for THE LAST INNOCENT HOUR. Both books take a rather dark view of the war, with nuanced views of flawed characters who don't always do the right thing. THE LAST INNOCENT HOUR was about Nazi officers and an American-German woman who felt torn, caught between the American desire at the time to remain uninvolved in the conflict and her closeness with a family friend who has become a soldier, and the stark knowledge that something about the German soldiers' ideas and actions isn't quite right.

THE KOMMANDANT'S MISTRESS takes place on the other side of the table, in one of the camps. It is told in three distinct parts. The first part is narrated by the titular commander himself. The second part is narrated by his mistress. Interestingly, the third part is told in a "neutral" tone, as though in a history textbook. The narrative style has an additional quirk in the first two parts: it's a nonlinear timeline, and there aren't paragraph breaks between these jumps. Instead, there will be a description or dialogue tag that triggers the characters' memory of an earlier or later even that is related to what is going on and the new scene will be described until another jump takes place.

I can see why the reviews for this book are so mixed and there are several things to keep in mind before reading or purchasing this book, I think.

1. The book will be difficult for non-native speakers or people who have reading disabilities. The nonlinear storytelling is very confusing, since it often happens mid-paragraph. Being someone who speaks a second language, I can tell you that when you only really understand the technical parts of a language, the "inference" parts can be what get you. The language in this book is not particularly difficult but what the author does with it within the parameters of the story is. Caveat lector.

2. The content is very dark. Most of the worst things happen off-screen, but you still know what's happening. Murder, racism, anti-semitism, violence, rape, abortion, torture, abuse - this book runs the gamut of things that people will find unpalatable. It's necessary, to tell the story in a way that feels honest (concentration camps were awful places), but it's still hard to read.

3. The Nazi characters are portrayed as nuanced and sometimes even sympathetic characters. I mean, this feels like a given since the first part of the book is narrated by the Kommandant. He's obviously not going to think of himself as a bad guy (at least not at first). He really believes himself to be a hero, and thinks that taking one of his prisoners as his mistress is his due for rescuing her from the gas chambers. A transformation happens towards the end, where he seems to really understand what he's done and truly be haunted by it, but until that point, his actions are pretty disgusting to read. Even so, he is a well-rounded character, and I have seen people complaining that Nazis should only be portrayed as bad people - not as heroic-type characters and not as love interests. While I understand what they mean, I disagree. History has nuance. Nazis are bad people, but within the framework of history, not all of them were objectively bad people who realized that they were doing wrong (bar any high-ranking officers in the know who did, obviously). To write such characters as blanket bad guys with cartoonish villainy reads to me like propaganda. I felt like the author did a really good job portraying the terrible actions of the Nazis while showing that they were real people.

4. The ending is kind of confusing and nebulous. It was obvious to me what happened to "Rachel." But at the same time, the Kommandant's ending was much less clear. When did he actually die? When he and Rachel meet again, is he a figment of her imagination? Or did they both escape their dark fates the first time, only to meet again in tragedy once more? I don't want to say more because spoilers, but if you read this book and then get to the last part, you'll see what I mean.

I really enjoyed this book a lot. It was dark, with sympathetic and interesting characters, and seemed very well-researched. I ached for poor Rachel, and how everyone around her was always trying to use her. Her incompetent and foolish parents, the abuse she suffered at the hands of her fellow Jews in the camps for her "favoritism," and her constant encounters of the Kommandant really made me feel so bad for her. The Kommandant is also an interesting character, and seeing his sharp fall from grace isn't quite as satisfying as it should be, since by the end he seems such a broken man.

If you enjoy morally grey books that will make you think, you will enjoy this book (and probably THE LAST INNOCENT HOUR) a lot, too. I've read a lot of WWII fiction that takes a romantic, safe look at the war, with black and white portrayals of morality. This feels much more realistic, even if that realism ultimately makes it more painful. Excellent book.