A Business Engagement by Kasumi Kuroda 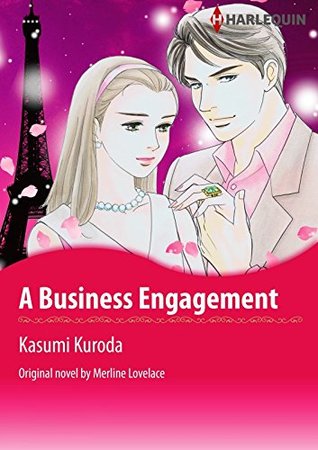 I bought this manga because it was only $0.49 in the Kindle store. I saw it a while back for $1.99 and passed, so this lowering of the price felt like kismet. The premise sounds cliche and silly. Sarah is of noble ancestry but now they are impoverished. She works at a magazine called Beguile (think Glamour or Vogue) where her boss is constantly trying to leverage her tragic history for a story. One day, a man who featured in one of their recent articles (top ten sexiest single males - he was #3) comes into the office demanding to speak to Sarah. He has video footage of Sarah's sister Gina in his house, stealing a priceless artifact. He tells her that he's going to go to the police - unless she agrees to pose as his fake fiancee long enough for him to close a business deal with a sketchy female CEO who is hell-bent on seducing him, despite his protests.

My expectations for A BUSINESS ENGAGEMENT were not high, but I actually enjoyed it a lot. The art is great. I tend to prefer the more delicate styles, and this is very classic old school shoujo. The story also isn't that bad. Sarah and Devon are both good characters. I liked Sarah's devotion to her grandmother, and how big a role her grandmother had in her life. Her sister was an idiot, but she wasn't malicious, and I was ultimately okay with Gina, too. There are misunderstandings, but they actually feel reasonable. The sex scenes are hot and, surprisingly, more graphic than many of these manga usually are. I also thought the dialogue was great, and translated well to this format. It was a solid effort.