The Substitute Wife by Junko Matsufuji 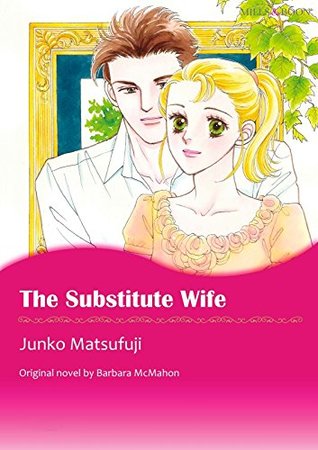 Man, I am revving my way through my collection of Harlequin manga. It feels like I've read 20+ of them in the last week, they're practically bite-sized. THE SUBSTITUTE WIFE is an adaptation of a novel by Barbara McMahon and illustrated by mangaka Junko Matsufuji. I wasn't acquainted with the work of either artist, but Matsufuji's art reminds me of Wataru Yoshizumi's work (you may know her as the mangaka of the popular shoujo manga, Marmalade Boy). The story itself wasn't too bad either, especially considering I'm not normally into books like these that are all about motherhood and wifery.

Deanna is an art student looking for a job to pay her tuition. She applies to be the live-in nanny for a man named Jay, who is in charge of a security firm. His wife is dead and he has two young daughters who are in need of care when he's away. Despite her lack of relevant experience, Deanna is hired because Jay finds her appealing in spite of himself and thinks her energy might be good for his girls.

There's a bit of a Sound of Music vibe to this book. Jay is a strict authoritarian/disciplinarian figure who has his girls on a schedule that runs like clockwork. He's also a bit of a sexist, actually uttering the phrase "that's women's work" in front of his girls at dinner, and to my surprise, the heroine calls him out and tells him that he needs to be a good example for his children if he wants them to be independent when they're older. The dead wife was apparently a Stepford Wife, so Jay has a hard time adjusting to the fact that women might not adore the opportunity to serve him dinner. Lols, not.

As far as these sorts of stories go, THE SUBSTITUTE WIFE really wasn't that bad. My expectations were pretty low, so I found myself pleasantly surprised. It was more empowering than I thought it would be. The only problem is that there's a Big Misunderstanding in the last act, because of course there is, due to Deanna taking something Jay said about wanting a boy (and she didn't even hear him say it - it was hearsay) out of context, and doing an epic flounce out of the room in the middle of this party he invited her to because she can't have children and not being able to have his heir is devastating. No man would want a woman who can't breed! Sob, sob, sob. Side-eye.

Until that point, this book was doing pretty well with its empowering message. Look, I get that not being able to have children when you want them can be very traumatic and bring about grief, and I don't want to trivialize the pain that must bring. BUT, at the same time, I felt like it was handled very badly in this book. Deanna talks to Jay about being judgmental but at the same time, makes this terrible assumption about him (he'll want more kids if he remarries and it will have to be a boy) without even talking to him first. She also tells him that men don't want to be with women who are sterile, which is a big fat lie. It felt like a huge 180 from her earlier characterization so if she had reasons for feeling this way (emotionally abusive boyfriend, cruel words from a doctor), this might have made more sense instead of feeling like internalized misogynistic BS.

Apart from that one thing, THE SUBSTITUTE WIFE was actually pretty good and I liked both the storyline and the art work. Also, funny/random fact: I was looking at some of this mangaka's other works and one of them looks very racy! Bare boobs on the cover and everything. I found that amusing because usually these mangaka tend to be lesser-known shoujo or josei authors, and this is the first time that the HQ artist in question has done something so baldly explicit.