After the Ball by Takane Yonetani 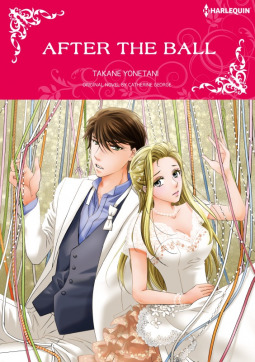 I need to make a Becky of the Golden Vagina shelf for heroines who are held up as pure, sweet souls but act like total jerks. Harlequin just gave me more manga to review (yay! bet you thought I'd forgotten about these pretties!) and I normally love, love, love HQ josei manga, but AFTER THE BALL was a huge disappointment. The premise is just so ridiculous and bad!

Eliza is our heroine, and when we first meet her she's impersonating her twin sister at a ball to help her win over the creep guy she likes (Paul, I think his name is). Paul is more interested in groping Eliza's boobs and butt than actual conversation, so she is partially relieved, and partially horrified, when her old crush Giles appears out of the woodwork to save her. Unfortunately, his timing is inopportune because the married(!) man Eliza just broke up with (Lawrence) has just divorced his wife and expects Eliza to be his "nice guy" prize for doing the right thing, AKA not indulging in adultery.

A lot of garbage drama happens. We find out that Eliza's twin sister actually lied about Giles taking advantage of her because she was jealous, so all the ill will that Eliza harbored against him for years was for nothing. We also find out that Paul, AKA Gropy McGroperson, knew that Eliza wasn't her sister all along - he was just so wowed by her gigantic rack that he decided he liked her better, ew. Also, the married man whose marriage Eliza broke up with attempts to assault her at a party in a fit of "Nice Guy" jealousy, because he's a nice guy, dammit!

AFTER THE BALL made me really angry. I couldn't stand the heroine or any of the three love interests. They were all gross garbage babies. When the book ended in a double wedding with the trash sister who pimps out her own sister to do her dirty work, I was like, "Happy ending????" I don't normally give these books a 1-star but I feel like I have no choice in this matter. Squick and a half.