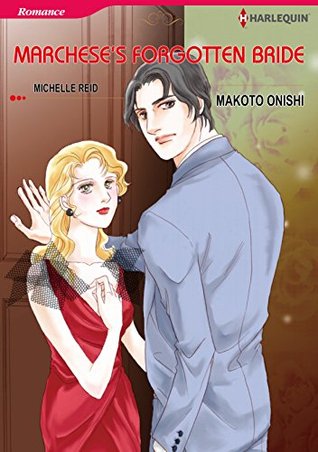 Fun fact: I bought this book because I actually thought the cover was kind of ugly - and it was only 99-cents. I feel like a lot of my impulse buys begin with the preface, "Well, it was only 99-cents." Man, I am such a trash-hole. I'll buy anything if it's on sale, apparently. Lucky for me, MARCHESE'S FORGOTTEN BRIDE was actually a much better book than the cover suggested.

Kathy met wealthy Italian businessman Sandro when she was a young girl and they had a passionate affair - a passionate, unprotected affair. This being a romance novel, of course, Kathy has twins. When she calls to tell him about them, he cruelly rebuffs her. Kathy has never gotten over her hurt over this and is stunned to see him at a party. He appears just as stunned. They lock eyes, and then suddenly he falls over in a swoon, clutching his head.

As it turns out, Sandro was in a car accident many years ago (around the time he hung up on her). It gave him ~amnesia~ and seeing his forgotten flame has brought back all those memories, which have brought headaches because he just can't even right now. To Kathy's surprise, he actually seems pretty eager to meet her kids, despite those cold words from before, and she's both touched and disappointed that despite her best efforts, she just isn't enough as a single parent, her kids obviously need a male presence, too.

Anyway, they start to hit things off again, and then Kathy finds out that she was the OW. When Sandro slept with her that first time, he had a fiancee. In fact, she died in the same car wreck that gave him his ~amnesia~. The reason he was so cruel to her that time she called was because she called in the middle of his dead fiancee's funeral. Oops. But it's okay, because it turns out he didn't even love her. The arrangement was done by their parents and they were considering breaking it off. How convenient, lols. Let's get married, I promise I won't cheat on you like I did the last one, babe.

Honestly, the art in this book isn't as derpy as the cover would have you believe and for an OW/secret baby romance (tropes I can't stand), it was okay. Once Sandro revealed that he was a cheater, though, I became disenchanted with the story. Especially since it turns out the fiancee died before she found out her spouse-to-be was a cheater, and Kathy is all relieved, like, "Oh, well at least she died at peace." Bitch, please. You waltzed in here with your give no trash attitude and slept with a cheater. Don't try to gloss over a shit-cake with edible gold-leaf and tell me it's gourmet. You a cheater by proxy (although I blame Sandro way more, because he knew).