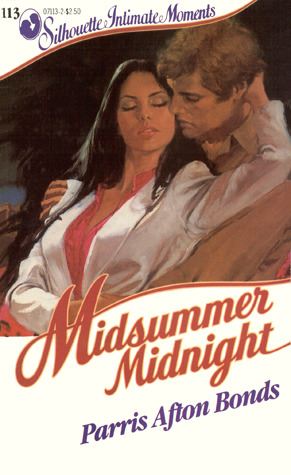 Fun fact, this book was free in the Kindle store on the same day that I had a date with an actual guy from Macedonia. The date, like this book, didn't really work out. Kismet? Maybe. Either way, it's funny - and so is this book, unintentionally. MIDSUMMER MIDNIGHT is apparently named after a celebration that seems to be Macedonian Mardi Gras. The heroine, Sigourney Hamilton, is a journalist who ends up being kidnapped by Damon Demetrios because he wants her to report on the Macedonian rebellion (I'm guessing from the Socialist Federal Republic of Yugoslavia (SFRY) based on the date that this was published). However, she keeps referring to the secret police organization VASIK, which, if this was SFRY-related seems like it probably should have been OZNA? Also, hilariously, the dictator dude in this book is named Agamemnon. Yeah, like that Agamemnon. *side-eye* Is his #1 VASIK thug named Achilles?

I have had mixed success with Parris Afton Bonds's novels. She wrote primarily during The Age of Bodice Rippers. DUST DEVIL, one of her earlier books, was the story that gave no f*cks. Racism, mutilation, rape, torture? Why not? It's fun for the whole family! I might have liked it for the sheer ballsiness of the narrative, if not for the unspeakably dull last act, and for the happy ending-baiting that occurred in the second act, only to end in utter calamity. The other book of hers I read, LAVENDER BLUE, was more in line with what I expect from bodice rippers - dangerous, sexy hero, backdrop of danger and war, and a heroine who is bold to the extent of being unreasonable. It probably would have been a five-star book, if not for the hero's Mr. Hyde transformation in the last of act of the book, where he randomly decides to ill-treat the heroine. You know, for funsies. I don't expect my books to be 100% politically correct, but by golly, if you're going to write a character one way, you keep them that one way and don't do a 180 for shock value!

MIDSUMMER MIDNIGHT was completely different from these other two books in that it is a contemporary romance (the other two were historical) and seems to be trying to emulate the Harlequin Presents sort of storytelling, with the ingenue heroine who gets mixed up with the sexy and sexually formidable European alpha hero who dazzles her with his blend of riches and intimidation, although I will give Bonds credit for forgoing the typical Italian/Greek/Sheik formula for something slightly more esoteric. I'm pretty sure most people in the U.S. don't even know that Macedonia is a country, and wouldn't know where to begin looking for it on a map (no, it's not in Africa).

MIDSUMMER MIDNIGHT failed me because it is boring AF. I wasn't excited to read it at all, and when I rediscovered it on my Kindle and tried to continue where I left off, my brain wasn't having it. I'm kind of shocked, because both DUST DEVIL and LAVENDER BLUE had me flipping the pages trying to figure out what happened next, but I couldn't care less with MIDSUMMER MIDNIGHT. Maybe it was partially tarnished by my unsuccessful date, but mostly I felt like there wasn't enough chemistry between the h and the H or enough action in the storyline to keep me engaged.

This was a miss.