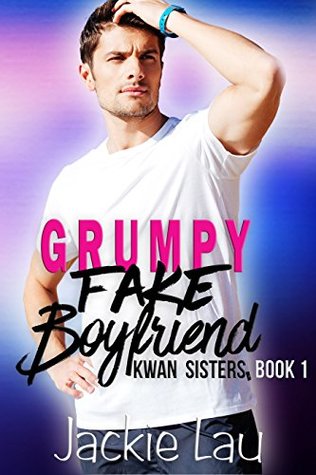 There's a quote that goes "champagne for my real friends, real pain for my sham friends." It's attributed to Francis Bacon, Tom Waits (and sometimes even Oscar Wilde) and appears in a Fall Out Boy song, but apparently used to be a popular toast back in the day (#BringBackChampagneVsRealPain2019). Regardless of the origin, I think we can all agree as to what the purpose of the quote is, which is that real is always better...

Except when it comes to the fake relationship trope in fiction! Because you know what I say, real relationships for my real life, and fake relationships for my trash life. My quote isn't as good as the one about champagne (problem #1: no champagne), but you get the point. We don't always want to read about what we want in our own love lives, which is probably why all of my favorite tropes in romance novels are such dysfunctional trash.

Not that I'm sorry about that. #SorryNotSorry

GRUMPY FAKE BOYFRIEND is kind of an amazing book. My expectations weren't super high because it got mixed reviews from my friends, but the guy on the cover was super cute, it featured one of my favorite tropes, and the heroine is a WoC. Plus, the hero is a grumpy introvert humorous sci-fi author who I kinda pictured as being like John Scalzi. Love!

Will, the hero, knows something's up when his friend Jeremy invites him out to drinks and asks for a favor. The favor is that he pretends to be his younger sister's boyfriend for a weekend getaway. Naomi, the heroine, has been invited to a cabin vacation in the woods by her friends, but they're all in relationships or engaged, and her ex is going to be there with his new fling. Naomi is very outgoing and wants to go out and socialize, but she doesn't want to be the one sad unicycle in a room full of bicycles, which is where Will comes in. Surprising himself (and the audience), Will agrees.

This being a weekend getaway with couples, you can imagine that there are some sexy scenes in here. You are not wrong. They are very well written sexy scenes, too. There's also some relationship drama and good discussions about what flaws you're willing to tolerate in a partner and what flaws are deal breakers. I also liked the point made that you don't have to date someone exactly like you to be happy - it's all about finding someone who complements you and makes you feel good about your relationship at the end of the day by showing compassion and affection, even during the bad times.

Also, I'm feeling a little personally-attacked by how spot-on Will's personality was. He is basically the male version of me minus the obsessive neatness.

GRUMPY FAKE BOYFRIEND is a really great book. It's light and fairly short, but the writing is solid, the romance is great, and both characters are immensely likable (and so are their friends, tbh). It kind of reminds me of Courtney Milan's Cyclone series. I can't wait to get my hands on the sequel, MR. HOTSHOT CEO. Not only am I digging the sexy Asian man on the cover, but the heroine is in STEM (biomedical research) and has depression. Um, yes to that representation?

P.S. GRUMPY is only 99-cents in the Kindle store still as of my posting this. Check it out!