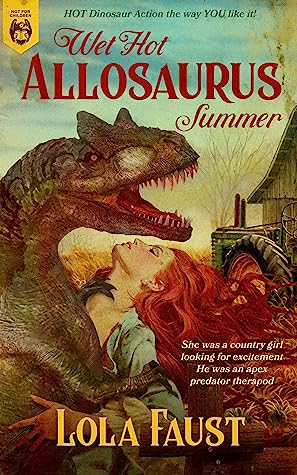 One of my friends recommended WET HOT ALLOSAURUS SUMMER to me-- I think because I reviewed all of those coronavirus erotica that were trending a few months ago. You read and review one freaky-deaky wtferotica and suddenly everyone thinks you want to read all the freaky-deaky wtferotica... and they are not wrong. At least not in my case. As soon as I was off work, it was on like dino-kong.

This is actually a collection of works by the publisher. The first story is the title story and then there's a follow-up from an author calling him- or herself Ambrosia Penance called Lord Bartholomew's Ankylosaur Lover, which features some man on anklyosaur lover action... only it stops just as the "couple" actually lock eyes. After that there is a series of "sexcerpts" which seems to be teasers from other dinoroticas from this publisher, and then there are some jokes about how to "properly" have sex with a dinosaur (which I found funny because I guess on the inside I'm secretly a teenager). And then there's another teaser for another erotica called The Elf and the MILF, or something like that.

A not insignificant portion of this book is teaser material and only the first two stories seem to be "complete" (and I'm not sure about the second). Wet Hot Allosaurus was REALLY weird. It kind of reminded me of that KFC-themed romance TENDER WINGS OF DESIRE in that the author seemed to be trying to capture the typical romance style rather than diving right into the porn. I actually have only read a handful of monsterotica books so I was unprepared for the scene where the allosaurus devours the heroine's gangrenous arm-- with love, of course. Um... that gives new meaning to the phrase "I want you inside of me." And not in a good way. And even though the allosaurus takes her virginity and her arm, as soon as they make it to a dino-human love sanctuary-- HE CHEATS ON HER.

The second story was boring because it doesn't even have any funny sex scenes. It ends with the hero getting hard, after talking about how green the female anklyosaurus's eyes are several times. I was not impressed with Lord Hard-for-you (my name for him) and his sad dino-boner.

Originally, I considered giving this book two stars but... the cheating in the first story and the lack of consummation in the second (COCK BLOCK!) were super annoying.

If you want to check out the weirdness, this book is free on KU, but I'm not sure I'd pay $3 for it. Giving credit where credit is due, though, I fucking LOVE that cover. I'm not being sarcastic, either-- it is a thing of beauty. It really captures the style of old pulp novels and was honestly the deciding factor in me wanting to read this book. The water damage/mold spot on the upper left corner is *chef's kiss*