The Maddest Obsession by Danielle Lori 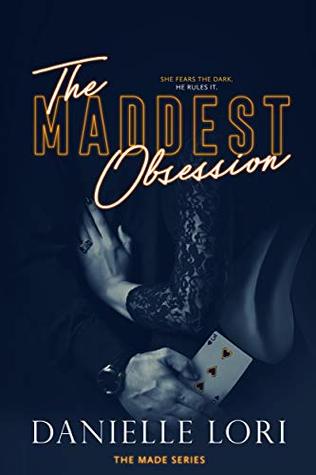 I was obsessed with book one, THE SWEETEST OBLIVION. I normally hate mafia romances but after I finished TSO, I was thinking about Nico and Elena for days and how explosive their chemistry was, and how much I loved the action sequences and the show-not-tell elements of the story. It was like watching a movie unfold in book form and I couldn't put it down. I finished it in just a few hours.

Obviously that meant I couldn't wait to jump into the sequel, THE MADDEST OBSESSION, which is about Christian Allister, the dirty fed who's in deep with the Abellis. And who is his love interest but Gianna, Nico's stepmother. She's basically like Harley Quinn if Harley Quinn were a mafia princess (so basically Margot Robbie a la Birds of Prey). I loved her outfits and in the beginning, I loved her smart mouth and her attitude. I thought this would be just as amazing as the prequel.

And then... something went wrong and it took me forEVER to get through this book. Gianna's sarcasm started to get less witty and more childish and Christian just felt like a pale, washed-out imitation of Nico. It's still leagues better than any mafia romance I've read but it didn't have the vivid, cinematic, larger-than-life element that drew me into the first book. The scenes with the therapist felt way too similar to The Sopranos, like it was a cheap attempt to show us that Christian was deep. I didn't like how the couple seemed to revel in their latex allergy, despite the fact that both of them had been with other people. I felt like Christian came off as controlling and stalkery like certain other Christians I could name. It just... didn't click.

I will say that I appreciate the author writing heroines who are in control of their sexuality and the inclusion of colorful side characters (although TSO was better at this). I also thought Christian had a truly dark backstory that was genuinely heart-wrenching. I also, again, loved all of Gianna's outfits. Since it was mentioned that she owned a Singer, I think she made a lot of them herself, which I thought was really cool. It was a good book... but with way more ups and downs than the first one and I just didn't enjoy it the way I wanted. I'll probably read more in the series and definitely more by this author, period, but I'm not quite as excited to meet Ronan as I was.

Thanks to Annalice for reading this with me!