The True Meaning of Cleavage by Mariah Fredericks 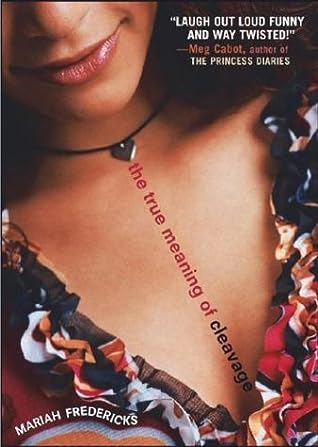 When I was a teen, my mom had a friend who was cool enough to get ARCs, so I have an old ARC of this book from 2003 because she gave this book to a then-teen me and said, "You need to read this." Skeptically, I did, wondering if this was one of those books that's supposed to teach you to love your body. Instead, I found myself reading about a heroine who was ~just like me~.

Obviously, since it came out almost twenty years ago (oh my God, I'm oLD), it's going to be a little dated. The kids don't use cell phones or social media. They just talk to each other. But the drama stays the same. Freshman Jess Horvath is an artist and a geek who is in love with a Star Trek-like franchise called Hollow Planet. Her best friend, Sari, is also on the social fringes, but unlike Jess, she's incredibly hot and beginning to reap in male attention.

When Sari gets involved with a hot senior guy, things get dramatic. Because the hot senior guy is named David and he's part of the ultimate senior power couple, as in "David and Thea." Sari is so in love with the idea of being the freshman who steals the older man away from his girlfriend that she doesn't see how she's being used, or how she's wrecking her life, but Jess does, and we get to see the entire situation through her bitter and jaded gaze, awash in judgement and jealousy, because Jess feels like Sari is growing up and leaving her behind.

I'm sad that this book seems to be out of print because this was one of the few books I read as a kid that I felt REALLY got me. Actually, if you want to know what I was like as a high school student, Jess is a pretty close approximation-- the author really captures what it's like to feel jaded and bitter and misunderstood and how you can feel wise beyond your years while still coming across as totally immature to anyone who knows better. Reading this as an adult was actually kind of magical because there were so many nuances I missed or things that went over my head (especially sexual references), and it really made me appreciate all the layers there were in this book.

I'm giving it a four because it is a bit OH MY GOD, DRAMA, but I still love it, and I've kept my same copy after all these years partially because it's an ARC and I treasure it, but also partially because reading it makes me so, so grateful that I am done with high school, even though this book kind of sort of almost makes me feel the tiniest bit of nostalgia for it, too.