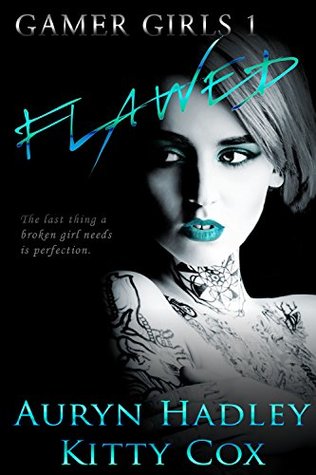 Who was the genius who decided to read eight books at the same time? This girl right here! But when I heard the premise of FLAWED, I really couldn't help myself. As a girl gamer myself, I'm always really interested in reading stories about girls who game and this one was apparently inspired by Gamergate. It's a new adult romance about being a rape survivor, overcoming addiction, found families, and first love, and building your passion project from the ground out.

First, credit where credit is due: I've never read a new adult book with a premise similar to this one. I'm not an engineer, but all of the coding and technical elements sounded convincing and I loved hearing all of the characters talk shop and gush about their work. I also stan a STEM heroine and I really appreciated the authors writing about a heroine who was so intellectual and comfortable around technical knowledge.

Dez started blogging about games when she was a teenager. She's a wunderkind and a genius and basically has a job guaranteed as soon as she graduates-- until she's kidnapped and tortured by a bunch of men who hate that women have gotten involved in games and that she has apparently taken it upon herself to be their voice. When she's released, she's not the same. She's badly traumatized and addicted to drugs and can't stand being touched because it brings back all of her trauma.

She has a random meeting with the tech CEO she used to idolize in a Home Depot and he recognizes her and offers her a job on the spot. He's also attracted to her but respects her space. As it turns out, he has past trauma and sexual hang-ups of his own: he's a sex addict who can't really find intimacy. So he starts letting Dez pick out his partners while she watches, which is kind of weird, but it ends up working for the couple and at times, is even kind of hot. At other times, it isn't, but I found these two fascinating to read about and even though it's not a reverse harem, you can totally tell that this author writes those romances because she ends up befriending all of the guys on Chance's team and by the end of the book, you know they'd die for her, and her for them-- it's a close-knit group, a family, and they're building something amazing together: an inclusive game that breaks all the tired stereotypes.

I think FLAWED did a great job shining a light on all the abuse that women gamers face online, but also how hard it can be to overcome trauma and the importance of having a support network in healing. I liked that neither the hero or the heroine were perfect, and that their attraction went beyond the physical. When Dez's past started coming back to haunt her, I was literally on the edge of my seat, biting my nails, hardly able to bear turning the page to see what would happen next. This book has a LOT of triggers and definitely won't be an easy read for most people. But I do really like the story and I think it has a healing message, rather than an exploitative one, which definitely helps.

Things I liked less were Chance's approach to his pick-ups. That did feel exploitative, especially since some of them didn't know they were being watched. He also decides to go alpha caveman in the last act which made me like him a lot less. I get that he's insecure and that his own "flaw" probably made affection feel conditional when he was young and vulnerable, but it was still hard to read, and the way he talked about the women he picked up often felt sleazy and kind of gross. I also felt like this book was a little too long, and that some of the scenes began to feel really repetitive and similar.

Am I going to read the other books in this series? Heck yes. I'm especially dying for Rhaven's story.