Prisoner of the Flames by Dawn Mactavish 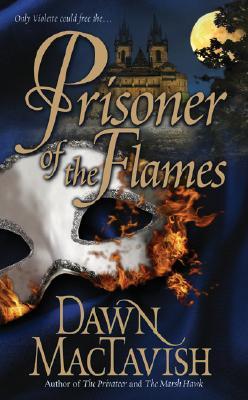 Officially, I stopped at 55% but I did skim all the way up to 80% to see if the book picked back up again to the AWESOMENESS of the beginning. It did not, which made me sad because I'm a sucker for the scarred hero trope, and Robert Mack gives off Phantom of the Opera/Beast vibes with his metal mask and his fierce demeanor. He is a noble Scot who was disfigured by a fire as a baby and now wears a metal helm to hide his face. He's heard of a healer named Nostradamus who he thinks might be able to fix his scarring, so he heads off to France right in the middle of what I believe is the French Wars of Religion.

Oh, and also there is plague.

The love interest is blind and can't see his scarring, and she thinks his face is beautiful. Her name is Violette and she's a flower girl, but she's also REALLY dumb and kind of a Mary Sue. I thought she was actually younger than she was-- she's nineteen. She acts about fourteen. Her only redemptive characteristic is that she's hot and the hero likes her boobs. You should see him panic when she gets the plague and thinks she might be scarred. "OH NO WHAT IF SHE'S NOT BEAUTIFUL." Hahaha what a hypocrite, you helmet-wearing assclown.

As I said, the first half of this book is amazing and made me think that this would be a four-star read. Robert, the hero's, character is very developed. I think Violette drags it all down and the mysticism the author incorporated didn't really work. I did love the writing though, and this author's other books sound fascinating, so I'm definitely going to try out more of her work because her ideas are so original.