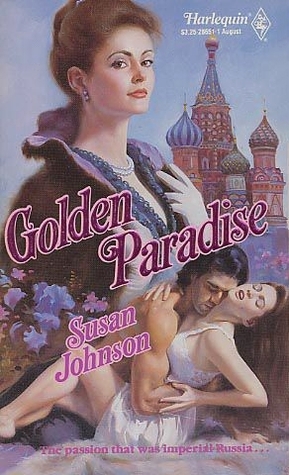 SEIZED BY LOVE is one of my favorite romances of all time (and if you haven't read it, I highly recommend that you read it ASAP). When I found out I was the proud owner of GOLDEN PARADISE, courtesy of my book hoard, I was like YAAAAAASS.

There are some things I loved about GOLDEN PARADISE. I liked that Lisaveta has more backbone than Alisa. She's a scholar, so she's actually really smart and independent and that totally throws the hero through a loop. The sex scenes between Stefan and Lise are great. The problem is... there's way too many of them and it kind of feels like they are intended as a substitute for character development. There's all this banter but they never really have the important and dramatic conversations that the characters in SEIZED BY LOVE did, nor did it have the same stakes.

Stefan, like Nikki from book one, is not one-woman-for-all-time kind of guy. When he meets Lise, he's ENGAGED and initially has no intention of breaking it off. In fact, he parades Lise around in front of his fiancee, much to both women's fury. Then he takes Lise off to one of his estates, forgetting that his mistress is there, and she flips out. As one does.

Both women end up getting bought off eventually to pay the way for Lise but it doesn't feel good. I think if you read this book as historical escapist erotica (and also for the Nikki cameos because NIKKI <3), you'll enjoy it more, but it really pales in the shadow of SEIZED BY LOVE, which is truly an exceptional work, comparable to the best I've read by Jennifer Blake. It's just such an amazing and epic love story with action, high stakes, beautiful descriptions, and flawed and interesting characters. This, by contrast, felt more like fanfiction. And while I would never tell someone that self-indulgence is something to be frowned-upon, it wasn't exactly what I was hoping for from this book.

That said, I'm still obsessed with this author's writing and her ability to write alpha heroes, so I will 100% be checking out her other books.